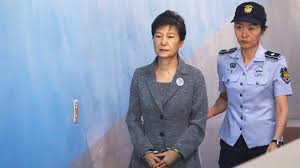 TEHRAN, Young Journalists Club (YJC) - A trial which lasted more than 10 months and highlighted shady links between big business and politics in South Korea ended with Park being found guilty on multiple criminal charges, including bribery and abuse of power.

Park's successor described the sentencing as a "heartbreaking event" for both the nation and the ex-leader herself.

"The accused abused the power bestowed by the people -- the true ruler of this country -- to cause chaos in national administration," said Judge Kim Se-yoon, delivering the ruling.

Park, 66, was convicted of receiving or demanding more than $20 million from conglomerates, sharing secret state documents, "blacklisting" artists critical of her policies, and firing officials who resisted her abuses of power.

"Despite all these crimes, the accused denied all the charges against her, displayed no remorse and showed an incomprehensible attitude by blaming Choi and other...officials," Kim said, referring to Park's secret confidante and long-time friend Choi Soon-sil.

When the wide-ranging corruption scandal broke last year it prompted massive street protests against Park across the country.

On Friday, the verdict was greeted with public displays of outrage and grief by several hundred Park supporters who had gathered outside the courthouse.

Many protesters sat or lay in the road crying, while others formed a protest rally calling for her release.

"The rule of law in this country is dead today," said Han Geun-hyung, a 27-year-old Park supporter.

Park herself was not in court for Friday's judgment which, in a rare move, was broadcast live on television. She had boycotted most sessions of the trial in protest at being held in custody.

Instead she was informed of her fate at a Seoul detention centre, where she sat in a reception hall with her lawyer awaiting the outcome, Yonhap news agency reported.

She now has seven days in which to file an appeal.

Park becomes the third former South Korean leader to be convicted on criminal charges after leaving office, joining Chun Doo-hwan and Roh Tae-woo, who were both found guilty of treason and corruption in the 1990s.

Judge Kim said he had passed a tough sentence to "prevent such an unfortunate event from happening again".

The presidential Blue House said in a statement after the verdict: "Each person must have different feelings about former President Park Geun-hye. But a bleak wind blew through the hearts of all of us today.

"It is a heartbreaking event for the nation as well as for the person's life. A history that is not remembered is bound to be repeated. We will not forget today."

Park, the daughter of dictator Park Chung-hee, lost both her parents to assassins. She took office in 2013 as a conservative icon who cast herself in the role of daughter of the nation -- incorruptible and beholden to none.

Less than four years later, she was impeached, stripped of all her powers and ousted from office on the back of months-long mass protests that brought millions on to the streets of Seoul and other cities.

Much of the public anger was focused on Park's relationship with Choi and accusations that she let her friend -- who held no formal position or security clearance -- meddle in state affairs, including high-level appointments and editing official speeches.

Choi is the daughter of a shadowy religious figure who had served as a mentor to Park for decades until his death in 1994. She was tried separately and sentenced in February to 20 years in prison.

Condemned in the media for her "Rasputin-like" influence over Park, Choi was convicted of using her presidential ties to squeeze tens of millions of dollars out of major South Korean businesses, including Samsung -- the world's top smartphone maker -- and retail giant Lotte.

Former leaders Chun and Roh received presidential pardons after each spent around two years in jail -- a privilege that may elude Park for many years, said Jeong Han-wool, an analyst at think tank Hankook Research.

"Given her attitude and public anger over her scandal that remains raw, it will be difficult to create a political environment in favor of her release any time soon," Jeong told AFP.

Park's left-leaning successor Moon Jae-in came to power largely because of the public backlash against Park and her conservative party, dimming hopes for a pardon under the current administration, he added.

"This is a good news for people who took to the street with candles but a nightmare for Lee Myung-bak," Chun told AFP.

Park's core supporters have always seen her as a heroically tragic figure who devoted her life to the service of her country despite childhood tragedy.

But for the vast majority of Koreans, she has now been permanently disowned, and will go down in history not as the country's first woman president but the first democratically elected leader to be forced from office.