TEHRAN, April 12 - Workers at a rural South Korean factory are busy extracting some of the world’s most coveted metals, used in the batteries that power electric cars. 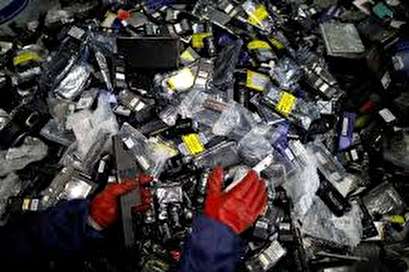 TEHRAN, Young Journalists Club (YJC) - Workers at a rural South Korean factory are busy extracting some of the world’s most coveted metals, used in the batteries that power electric cars.

But they’re not digging in the ground or refining ore. Instead, they are sorting through a pile of lithium-ion batteries from old mobile phones and laptops.

As China’s aggressive hunt for overseas cobalt and lithium for electric vehicles pushes up prices and causes a global shortage of the key metals, South Korea is increasingly turning to such “urban mining” to recover cobalt, lithium and other scarce metals from electronic waste.

In 2016, the most recent year from which data is available, 19.6 trillion won ($18.38 billion) worth of metals were extracted from recycled materials, meeting roughly 22 percent of the country’s total metal demand, according to a report by the Korea Institute of Industrial Technology.

SungEel HiTech is South Korea’s largest battery recycler. A decade ago, the company was at a crossroads as plasma TV panels, from which it extracted gold and silver, began to phase out.

Yi Kang-myung, SungEel HiTech’s president, said the shortage of mined metals had led his company to boost capacity by threefold this year. It plans to list in 2020.

“We are receiving phone calls from many who are showing interest,” Yi said in an interview at the plant.

The scarcity is unlikely to abate anytime soon, as China, the world’s biggest user of metals, snaps up mineral resources in countries like the Democratic Republic of Congo and Chile.

SungEel HiTech, based in the southwestern city of Gunsan, can process about 8,000 tonnes per year of spent lithium-ion batteries and metal scraps.

From that, it can produce about 830 tonnes of lithium phosphate, 1,000 tonnes of cobalt metal equivalent and 600 tonnes of nickel.

POSCO (005490.KS) processes lithium phosphate from SungEel to produce lithium carbonate for rechargeable battery makers LG and Samsung, according to SungEel and POSCO.

The battery recycler plans to increase its processing capacity to 24,000 tonnes by 2019 and expand further in 2021, including growing its overseas operations, Yi said.