TEHRAN, April 14 - Leader of the Islamic Revolution Ayatollah Seyed Ali Khamenei deplored overnight missile attacks on Syria by Washington and its allies as “a crime”, calling the presidents of the US and France as well as the British prime minister “criminals”. 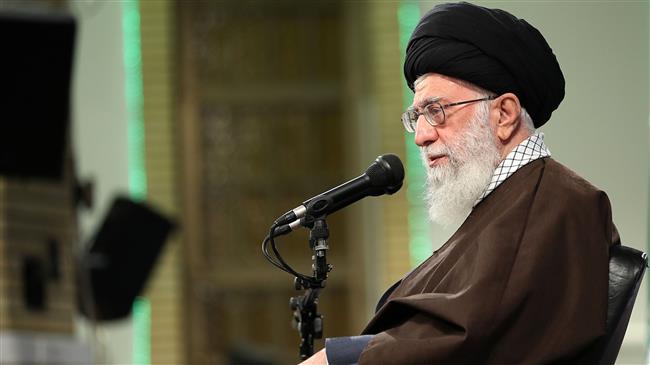 TEHRAN, Young Journalists Club (YJC) - “The dawn attack on Syria is a crime; I clearly declare that the US president, the French president, and the UK prime minister are criminals and have committed a crime,” Ayatollah Khamenei said, addressing a gathering of high-ranking Iranian officials and diplomats from Islamic countries in Tehran on Saturday.

The three countries will not profit from the move, just as they did not while in Iraq, Syria and Afghanistan, over the past years, committing the same criminal acts, the Leader added.

“Those, who were overtly and covertly supporting Daesh (also known as ISIS or ISIL), now claim that they have confronted and defeated them (the terrorists),” Ayatollah Khamenei said, adding, “That is a lie; that is not the case; they had no role” in efforts to defeat the Takfiri group.

“In the speech that the US president delivered just a few hours ago, he said we (the US) managed to defeat Daesh in Syria; a clear and blatant and disgraceful lie,” the Leader went on to say.

The Americans entered the scene of the battle and helped Daesh whenever the terrorists were under a siege and about to suffer a defeat, Ayatollah Khamenei said.

The Leader further emphasized that the US created the “evil creatures” called Daesh, using the money provided by the Saudi regime and the likes.

The United States and European allies launched airstrikes on Saturday against Syrian research, storage and military targets under the pretext of a suspected chemical attack near Damascus last weekend that killed more than 40 people.

Britain and France joined the United States in the strikes in a coordinated operation that was intended to show Western resolve in the face of what the leaders of the three nations called persistent violations of international law.

Trump characterized it as the beginning of a sustained effort to force Assad to “stop using banned weapons”, but only ordered a limited, one-night operation that hit three targets, New York Times reported.

“These are not the actions of a man,” Trump said of last weekend’s attack in a televised address from the White House Diplomatic Room. “They are crimes of a monster instead.”

Shortly after the attack, the Syrian presidency posted on Twitter, “Honorable souls cannot be humiliated.”

Within 90 minutes, the Russian ambassador to the US warned of “consequences” for the allied attacks.