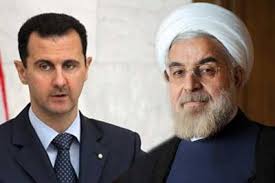 TEHRAN, Young Journalists Club (YJC) - Rouhani in a phone call with Syrian President Bashar al-Assad condemned the attack, saying that, “No doubt that the three countries and Arab countries which supported the aggression are responsible for this aggressive and wrong move.”

He said the aggression has not only included Syrian soil but also it violated stability of the entire region.

“No foreign country can decide about Syrian future. The prime decision makers are Syrian people. The Islamic Republic of Iran will stand by Syrian nation and government.”

Al-Assad, for his part, said this aggressive move has brought nothing for the aggressors.

He added the aggressors embarked on the aggression, which runs counter to all international rules, after had failed to reach their goals through political means.