TEHRAN, April 25 -Kuwait’s Foreign Ministry has decided to expel the ambassador of the Philippines to the Persian Gulf country amid a dispute over alleged abuse of workers. 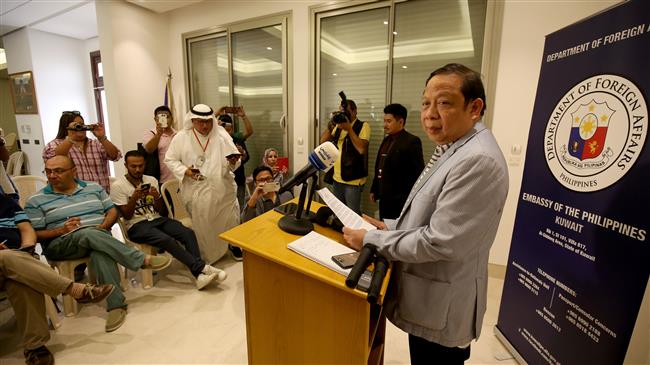 TEHRAN, Young Journalists Club (YJC) – The ministry on Wednesday gave Renato Villa one week to leave Kuwait while recalling its own ambassador from Manila, according to KUNA news agency.

It said in a statement that the Philippines' diplomatic mission in Kuwait City “smuggled Filipino domestic workers in flagrant defiance of the laws of the state of Kuwait,” declaring Villa persona non grata.

The decision comes amid a growing dispute between the countries over the fate of tens of thousands of workers from the Philippines who work in Kuwait but do not enjoy enough legal protection when it comes to abuse by some employers.

Kuwait summoned the Philippine ambassador on Wednesday to officially protest his comments reported in local press about measures adopted by the embassy to protect domestic workers who are abused by their employers.

Villa had said in interviews that his embassy was ready to help and rescue abused workers in Kuwait if Kuwaiti authorities failed to respond within 24 hours.

The ambassador and the Philippines' foreign minister offered an apology over the comments, which could affect the life of 260,000 Filipinos who work in Kuwait.

However, Kuwaitis welcomed the expulsion as a correct measure, with conservative lawmaker Shuaib al-Muwaizri saying the decision should not be revised.

“Expelling the ambassador of the Philippines is a correct measure ... The Ministry of Foreign Affairs should not accept any offers made by the Philippines president or his foreign affairs secretary,” Muwaizri said in a message posted on Twitter.

The row over lack of legal protection for Filipino workers intensified in February when Kuwaiti authorities discovered in a freezer the body of Joanna Demafelis, a mid-age maid who had been killed almost a year earlier by a Lebanese-Syria couple in Kuwait City. Manila then imposed a ban on the recruitment of the workers in Kuwait, prompting angry responses in the oil-rich Kuwait where many homes rely on Filipina nannies and maids.

The two countries were negotiating an end to the Philippines' ban. As part of the talks, Philippine authorities demanded that housemaids be allowed to hold their passports and cellphones, a right denied to them by many Kuwaiti employers.