TEHRAN, June 14 -London Zoo's lions showed off their football skills ahead of the official opening of the World Cup on Thursday, when a football painted in the colors of the English flag was put into their enclosure. 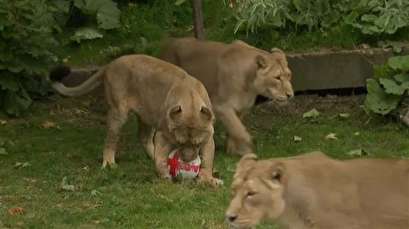 TEHRAN, Young Journalists Club (YJC) - The three Asiatic lioness sisters Heidi, Indi and Rubi were introduced to their new toy, which had been covered in their favorite herbs and spices, including turmeric.

Heidi gave a lesson in close control, using both her head and feet before hogging the ball and not passing it to her team mates.