TEHRAN, July 11 -Eight Mexican wolf cubs -- a jumbo-size litter -- have delighted conservationists fretting over the endangered species once common along the US-Mexico border. 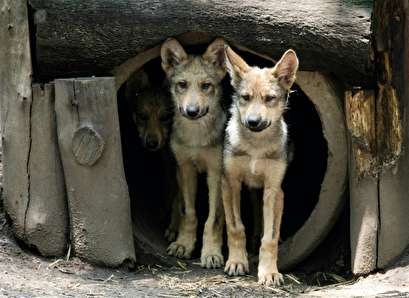 Normally, litters of this kind of wolf -- Canis lupus baileyi -- max out at four.

So this is the biggest litter born in a Mexico City zoo since a US-Mexican program to boost the population of the species began in the 1980s, the Environment Ministry said.

They were born at Los Coyotes Zoo in Mexico City in April and viewed by AFP on Tuesday.

The cubs were born inside a tunnel-like den, with no human witnesses, in a wooded area of the zoo, boosting their family from nine to 17 members.

The mother, named Pearl, took refuge in the den a week before giving birth, while father Yoltic protected them and provided food with help from his seven first-born offspring, which are a year old.

"When we saw Pearl outside and skinnier, we knew they had been born," said Felipe Flores, caretaker of the wolf family for the past two years.