TEHRAN, June 19 - President Trump and two members of his cabinet mounted an aggressive defense on Monday of his policy of separating children from their parents at the border in response to a growing outcry from members of both parties. 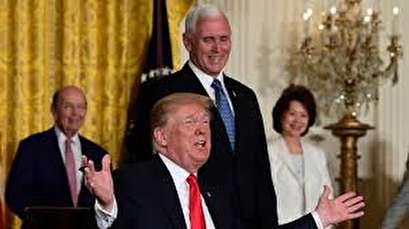 TEHRAN, Young Journalists Club (YJC) -President Trump and two members of his cabinet mounted an aggressive defense on Monday of his policy of separating children from their parents at the border in response to a growing outcry from members of both parties.

“They could be murderers and thieves and so much else,” Mr. Trump said of the people crossing the border. “We want a safe country, and it starts with the borders, and that’s the way it is.”

Attorney General Jeff Sessions also defended the practice, while insisting that “we do not want to separate parents from their children,” and later, at a tumultuous White House news briefing, Kirstjen Nielsen, the secretary of homeland security, gave a forceful explanation of the administration’s actions, arguing that it had no choice, and insisting that the only way the practice could end would be through congressional action.

Unlike Mr. Trump, she did not repeat the false accusation that only the Democrats, the minority party, were to blame for what she said was Congress’s failure to act to end a policy that, by some counts, has resulted in nearly 2,000 children taken away from their parents in a six-week period.

Ms. Nielsen insisted that the children who had been taken into custody were well cared for, but she was not able to answer several questions from reporters who demanded specifics about their whereabouts and care. She said she had not seen widely circulated footage of families penned behind chain-link cage fencing, nor heard audio taken of children wailing inside detention centers.

“Parents who entered illegally are by definition criminals,” Ms. Nielsen said. “By entering our country illegally, often in dangerous circumstances, illegal immigrants have put their children at risk.”

Initially, the criticism of what was occurring at the border came mainly from Democrats and former first ladies, including Laura Bush, whose husband also struggled with how to stop illegal immigration when he was president. On Monday, Michelle Obama and Rosalynn Carter both weighed in, with Mrs. Carter saying in a statement that “the practice and policy today of removing children from their parents’ care at our border with Mexico is disgraceful and a shame to our country.”

After Mr. Trump’s latest comments on Monday, a growing number of Republican lawmakers — including Representative Steve Stivers of Ohio, who leads the House Republicans’ campaign arm — joined the chorus of criticism. Mr. Stivers warned that if the policy is not changed, he would support “means to stop unnecessary separation of children from their parents.”