Protests continue in Macedonia as deal with Greece proceeds

TEHRAN, June 24 -People in Macedonia have staged a rally in the capital, Skopje, to protest an agreement between their government and Greece that would officially modify the name of their country. 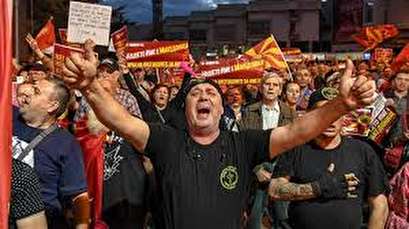 TEHRAN, Young Journalists Club (YJC) -People in Macedonia have staged a rally in the capital, Skopje, to protest an agreement between their government and Greece that would officially modify the name of their country.

Greece had long insisted that the name Macedonia implied territorial claims on a northern Greek province of the same name.

Earlier this month, Skopje and Athens agreed to settle that dispute by adding the geographical qualifier “Northern” to Macedonia’s title, changing it to the “Republic of Northern Macedonia.”

Some 1,000 nationalist protesters staged a rally in Skopje on Saturday under the motto “Never North, always Macedonia.”

They marched on the Macedonian parliament, carrying flags and banners to protest the agreement.

But the deal has already been ratified by the Macedonian parliament. That ratification came despite Macedonian President Gjorge Ivanov’s refusal to approve the deal.

The agreement now needs to be approved in a referendum in Macedonia in September, and the Macedonian constitution will have to be modified to incorporate the new name.

Once those developments have taken place, the Greek parliament, too, will ratify the deal, and Athens will stop blocking Macedonia’s potential accession to the European Union (EU) and NATO.

Only then will the deal come into official effect.

The agreement has faced opposition by groups of nationalists on both sides of the border. Earlier on Saturday, a violent protest was held against the deal in Athens.

Some people in Greece claim that their northern neighbor is also laying a claim to the Greek Macedonia Province’s ancient cultural heritage.

This is while the ancient kingdom of Macedon has long been broken up and divided between Macedonia, Greece, Bulgaria, Albania, and Serbia.