TEHRAN, June 24 -The United States has moved 100 wooden coffins to the North Korean border to receive the remains of American soldiers killed during the 1950-53 Korean War. 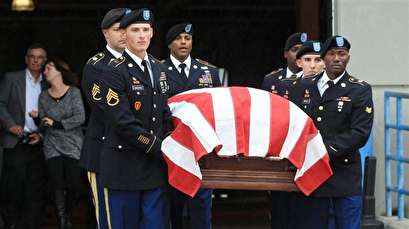 TEHRAN, Young Journalists Club (YJC) -The United States has moved 100 wooden coffins to the North Korean border to receive the remains of American soldiers killed during the 1950-53 Korean War.

The temporary transit cases, which have been build in Seoul, were transported to the Joint Security Area -- a series of blue meeting houses within the demilitarized zone that offers a neutral place to communicate, the United Nations Command said Saturday.

"We are ready to receive remains and be able to transport them in a dignified manner," the command's public affairs office told the Stars and Stripes and Military Times.

The US military has reportedly prepared 158 metal cases to transfer the remains home. No date has been set for their return.

North Korea agreed to return US war remains during the June 12 summit between Kim Jong-un and President Donald Trump in Singapore.

Following their meeting, the first between a sitting US president and a North Korean leader, Trump and Kim signed a joined document, committing to establishing new relations and achieving peace on the Korean Peninsula.

“We got back our great fallen heroes, the remains sent back today, already 200 got sent back,” Trump told a crowd in Minnesota on Wednesday.

There was no official confirmation or denial of the president’s claim.

However, efforts to recover and return other remains have stalled for more than a decade because of tensions over the North’s nuclear program and US claims that the safety of American search teams was not guaranteed.

US officials believe that the remains belong to more than 200 missing soldiers that North Koreans likely have recovered from land during farming or construction.

But the precise number and identities of the soldiers will not be fully known until the remains are returned and tested.

More than 36,000 US service members died in the Korean War, including those listed as missing in action. Close to 7,700 American soldiers still remain unaccounted for from the conflict. About 5,300 of those are believed to have been lost in North Korea.

The last time Pyongyang returned remains of American soldiers was in 2007, when Bill Richardson, a former UN ambassador, secured the return of six sets.