More US troops killed in training than in combat

TEHRAN, June 25 -The US military has been losing more troops in training than in combat situations over the past few years, a trend that has sparked concerns in Congress. 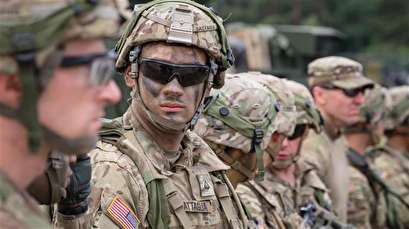 TEHRAN, Young Journalists Club (YJC) -The US military has been losing more troops in training than in combat situations over the past few years, a trend that has sparked concerns in Congress.

At least 80 US service members were killed in training accidents last year compared to the 21 that died in combat, according to statistics cited in this year’s military spending bill, the National Defense Authorization Act.

This has been the trend since 2015, according to Representative Mac Thornberry (R-Texas), chairman of the Armed Services Committee.

The Texas lawmaker says fatal, noncombat accidents from between 2015 and 2017 killed at least 185 service members compared to the 44 military personnel who were killed in frontlines.

A large chunk of the fatalities were caused by aerial mishaps, a serious problem the US military has been dealing with over the past few years.

According to a research by Military Times in May, a total of 133 US servicemen were killed in aerial mishaps between 2013 and 2017.

In comparison, a March 2018 report from the UK Ministry of Defense showed that only 141 members of British armed forces had been killed during training from January 2000 through February 2018.

At least 25 of those deaths occurred over this spring alone, as data based on Freedom of Information Act requests to the Naval Safety Center, the Air Force Safety Center and the Army Combat Readiness Center has revealed.

In fiscal year 2018, which started on October 1, American military aircraft have already been involved in 12 fatal accidents resulting in a six-year high record of 35 deaths of military pilots and crew.

Adam Smith, the ranking Democrat on the House Armed Services Committee, has called for all aerial incidents between fiscal years 2013 and 2018 to be reviewed and compared to historic averages by an independent committee.

Smith says 2013 was the first year that large congressional budget cuts, known as sequestration, were approved. The cuts have been partly blamed for the rise in aerial mishaps.

Smith and many of his colleagues in Congress believe cuts to the military budget has forced the air force and other branches of the US military to reduce training time and make training routines more aggressive. That seems to be putting too much pressure on the personnel.

US President Donald Trump’s massive $716 billion NDAA for the fiscal year 2019 has addressed this issue with a record increase compared to past years. The increase would only be possible if the government makes significant cuts to public spending.

Share to
Related News
Trump turns on Mattis, taking military matters to his own hands: Officials
US moves 100 coffins to North Korea border to receive war remains
‘Make it so’? Trump orders creation of US Space Force as military branch
US Senate approves $716bn military budget
Tags
killed ، US military ، combat
Your Comment