TEHRAN, June 26 - At least nine civilians have been killed and nearly a dozen others sustained injuries after warplanes belonging to a Saudi-led military coalition struck a bus carrying internally displaced persons (IDP) in war-battered Yemen’s western province of Hudaydah. 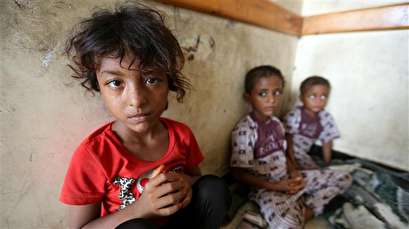 TEHRAN, Young Journalists Club (YJC) - Yemen's Arabic-language al-Masirah satellite television network, citing its correspondent in the area, reported on Tuesday that the deadly airstrike hit the bus on a road linking the two towns of Jarrahi and Zabid earlier in the day, adding that three of the dead had been torn to pieces beyond recognition.

The report further said that at least 11 other people onboard the ill-fated bus had been wounded in the aerial aggression.

Since June 13, the Saudi-led military coalition, coupled with the militia loyal to Yemen’s former President Abd Rabbuh Mansur Hadi, have been breathing fire on Hudaydah port city, the provincial capital, a densely-populated city and the war-torn country's most vital port, which is the entry point for 70 percent of the impoverished country.

The invaders are trying to seize the vital port and its important international airport from fighters of the Houthi Ansarullah movement, which is a significant aid to the Yemeni army in defending Yemen against the invading forces and that has been running state affairs in the absence of an effective administration during the past three years.

The invasion of Hudaydah has already triggered fears of a fresh humanitarian crisis in a country where more than 22 million people are in need of aid, including 8.4 million who are at risk of starvation.

Saudi Arabia and its allies launched a brutal war on Yemen in March 2015 to reinstall the Hadi regime and crush the popular Houthi Ansarullah movement.

Several Western countries, the United States and Britain in particular, are accused of being complicit in the aggression as they supply the Riyadh regime with advanced weapons and military equipment as well as logistical and intelligence assistance.