TEHRAN, July 01 - Turkish military aircraft have “neutralized” eight members of the Kurdistan Workers’ Party (PKK) militant group when they separately carried out a string of airstrikes against terrorist hideouts in Iraq's northern semi-autonomous Kurdistan region as well as southeastern Turkey. 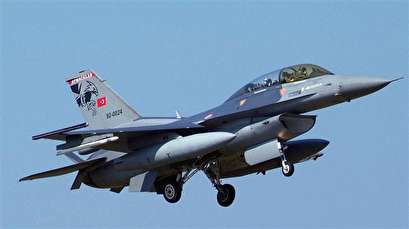 TEHRAN, Young Journalists Club (YJC) - The Turkish General Staff, in a message published on its official Twitter page, said fighter jets had conducted airstrikes on Saturday and Sunday on northern Iraq's Zap region in addition to the rural areas of Turkey's southeastern provinces of Sirnak and Van.

The Turkish military generally uses the term "neutralize" to signify that the militants were killed, captured or surrendered.

The development came only a day after Turkey’s military said it had conducted airstrikes against PKK strongholds in the Avasin-Basyan region of northern Iraq, killing at least four Kurdish militants in the process.

On June 8, at least nine PKK militants were killed when the Turkish military carried out an airstrike in Sirnak province.

The provincial governor's office said in a statement that the aerial assault took place in Bestler-Dereler region near the provincial capital city of Sirnak, situated some 1,000 kilometers east of the capital Ankara.

Turkey, along with the European Union and the United States, has declared the PKK a terrorist group and banned it. The militant group has been seeking an autonomous Kurdish region since 1984.

Over the past few months, Turkish ground and air forces have been carrying out operations against PKK positions in the country as well as in northern Iraq and neighboring Syria.