TEHRAN, July 01 - Georgia deputies got a lucky break when they stumbled upon a massive, $1.2 million marijuana grow house, while making a house call on an unrelated matter in Cherokee County. 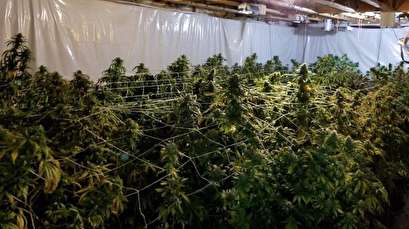 TEHRAN, Young Journalists Club (YJC) -The Cherokee County Sheriff's Office paid a visit to the home of Carlos Suarez-Diaz Canton on Friday, looking for a suspect to serve a felony arrest warrant. They found a lot more than they’d bargained for when they entered the basement: A forest of plump marijuana plants.

“When deputies attempted to make contact with the wanted subject, not Suarez-Diaz, they located an unsecured door in the basement area of the home.” Cherokee County Sheriff Frank Reynolds said in a statement. “When the deputy opened that door they observed what appeared to be a large marijuana grow house.”

The grow house contained a whopping 247 plants and over 100 pounds of weed. According to authorities, the drugs had a street value of $1,287,000.

“This is not a mom and pop operation. This is a very sophisticated operation," Cmdr. Phil Price of Cherokee Multi-Agency Narcotics Squad told WSBTV.

The deputies then spotted Suarez-Diaz, who ran from the house when he saw the authorities. The deputies chased him over several fences in neighboring backyards before they caught him.

Suarez-Diaz has been arrested for trafficking marijuana, possession/manufacturing marijuana, obstruction of an officer and escape. He is in custody at the Cherokee County Adult Detention Center.