Trump warns NATO to boost defense spending ahead of summit

TEHRAN, July 04 -US President Donald Trump has written to several NATO allies, asking them to increase their share of the costs for defense of the alliance and warning the United States is losing patience. 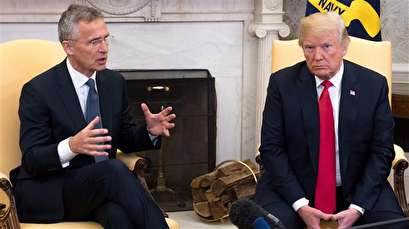 TEHRAN, Young Journalists Club (YJC) -US President Donald Trump has written to several NATO allies, asking them to increase their share of the costs for defense of the alliance and warning the United States is losing patience.

Trump sent letters last month to leaders of NATO allies including Germany, Belgium, Norway and Canada, ratcheting up tensions ahead of the NATO summit in Brussels next week, according to The New York Times.

The US president highlighted long-standing complaints that other countries are not contributing enough to NATO and that the US is bearing too much of the alliance's load.

Most of the content sent to the various leaders was similar, but sources told The Times that the message delivered to German Chancellor Angela Merkel had particularly tough language.

"As we discussed during your visit in April, there is growing frustration in the United States that some allies have not stepped up as promised,” the letter read.

"Continued German underspending on defense undermines the security of the alliance and provides validation for other allies that also do not plan to meet their military spending commitments because others see you as a role model," Trump wrote to Merkel.

The president further claimed that the frustration was not just confined to the US government and the American people shared his views on the matter.

"It will, however, become increasingly difficult to justify to American citizens why some countries do not share NATO's collective security burden while American soldiers continue to sacrifice their lives overseas or come home gravely wounded.”

Trump has publicly chided NATO allies before, but the individual letters weeks before the July 11-12 summit of the alliance could set the stage for tensions.

Some recipients did not appreciate Trump's message, saying they were working to meet commitments they made at a NATO summit in 2014.

"I am not very impressed by this type of letter," Belgian Prime Minister Charles Michel told reporters on the sidelines of a European Union meeting. "Belgium has halted the systematic fall in defense spending and takes part in a lot of military operations."

Analysts say Trump’s criticism of NATO, combined with his protectionist policies on trade and unilateralist foreign policy, risk undermining the US global standing.

"We are voluntarily giving up our position of advantage, supremacy, creating a level playing field where everybody essentially decides what deals they are going to make,” Council on Foreign Relations President Richard Haass said on NBC’s “Morning Joe.”

“Either they have to defer to more powerful countries like a China or a Russia, rather than being able to depend on a reliable United States, or they simply do what they think is in their own best interests.”

NATO members pledged to spend 2 percent of their gross domestic product (GDP) on national defense in 2014, and Trump has repeatedly criticized them for not fulfilling that commitment.