TEHRAN, July 03 -President Trump has written sharply worded letters to the leaders of several NATO allies — including Germany, Belgium, Norway and Canada — taking them to task for spending too little on their own defense and warning that the United States is losing patience with what he said was their failure to meet security obligations shared by the alliance. 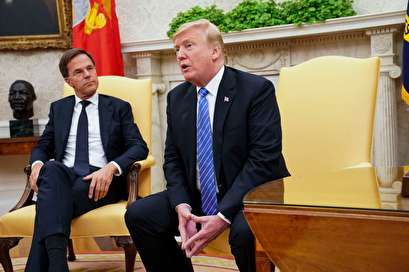 TEHRAN, Young Journalists Club (YJC) - President Trump has written sharply worded letters to the leaders of several NATO allies — including Germany, Belgium, Norway and Canada — taking them to task for spending too little on their own defense and warning that the United States is losing patience with what he said was their failure to meet security obligations shared by the alliance.

The letters, sent in June, are the latest sign of acrimony between Mr. Trump and American allies as he heads to a NATO summit meeting next week in Brussels that will be a closely watched test of the president’s commitment to the alliance. Mr. Trump has repeatedly questioned its value and has claimed that its members are taking advantage of the United States.

Mr. Trump’s criticism raised the prospect of another confrontation involving the president and American allies after a blowup by Mr. Trump at the Group of 7 gathering last month in Quebec, and increased concerns that far from projecting solidarity in the face of threats from Russia, the meeting will highlight divisions within the alliance.

Such a result could play into the hands of President Vladimir V. Putin of Russia, who is to meet with Mr. Trump in Helsinki, Finland, after the NATO meeting, and whose primary goal is sowing divisions within the alliance.

In his letters, the president hinted that after more than a year of public and private complaints that allies have not done enough to share the burden of collective defense, he may be considering a response, including adjusting the United States’ military presence around the world.

“As we discussed during your visit in April, there is growing frustration in the United States that some allies have not stepped up as promised,” Mr. Trump wrote to Chancellor Angela Merkel of Germany in a particularly pointed letter, according to someone who saw it and shared excerpts with The New York Times. “The United States continues to devote more resources to the defense of Europe when the Continent’s economy, including Germany’s, are doing well and security challenges abound. This is no longer sustainable for us.”

“Growing frustration,” Mr. Trump wrote, “is not confined to our executive branch. The United States Congress is concerned, as well.”

The president’s complaint is that many NATO allies are not living up to the commitment they made at their Wales summit meeting in 2014 to spend 2 percent of their gross domestic product on national defense. American presidents have long complained about the lack of burden-sharing by NATO member countries, but Mr. Trump has taken that criticism much further, claiming that some of the United States’ closest allies are essentially deadbeats who have failed to pay debts to the organization, a fundamental misunderstanding of how it functions.

The Trump administration has already reportedly been analyzing a large-scale withdrawal of American forces from Germany, after Mr. Trump expressed surprise that 35,000 active-duty troops are stationed there and complained that NATO countries were not contributing enough to the alliance.

In the letter, Mr. Trump told Ms. Merkel that Germany also deserves blame for the failure of other NATO countries to spend enough: “Continued German underspending on defense undermines the security of the alliance and provides validation for other allies that also do not plan to meet their military spending commitments, because others see you as a role model.”