TEHRAN, July 09 - US Secretary of State Mike Pompeo is in Afghanistan on a surprise visit to hold talks with the country’s officials following a last month’s brief truce between Kabul and the Taliban. 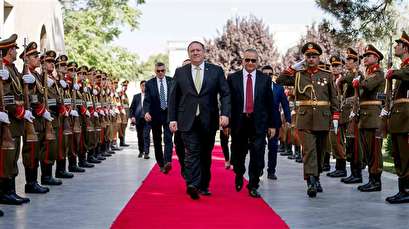 TEHRAN, Young Journalists Club (YJC) - Pompeo arrived in Kabul on Monday, in his first visit to Afghanistan since he was sworn in as the top US diplomat in April.

He met with Afghan President Ashraf Ghani and was scheduled to meet with US forces in Afghanistan before leaving the country.

The United States maintains thousands of troops in Afghanistan in an alleged bid to train local forces in the fight against militants and conduct counter-terrorist missions. However, many believe the US views its troops deployment in Afghanistan, which started after the 2001 invasion of the country, as a strategic one that should be extended as long as possible.

Pompeo’s unannounced visit comes a month after the government and the Taliban, the main militant force in Afghanistan, agreed a ceasefire on the occasion of Eid al-Fitr Muslim holidays. The Taliban then rejected an extension offer from Ghani’s government, resuming attacks on civilians and security forces across the country.

Some Afghan officials have claimed that the three-day ceasefire at the end of the holy fasting month of Ramadan helped ease attacks by the Taliban. They believe the government and its foreign supporters can build upon the initiative to bring the Taliban to the negotiation table.

However, the Taliban are hardly willing to engage in such talks and have vowed to continue their bloody fight until all foreign forces pulled out of Afghanistan.

But, some sources within the Taliban have showed their willingness to go to direct talks with the US, saying they will not hold talks with a Western-backed government in Kabul.

At a joint news conference with Ghani in the presidential palace in Kabul, Pompeo repeated an offer for the US to take part directly in talks with the Taliban, but said the peace process would be Afghan-led.

He said his country would be prepared to participate in such talks to help resolve differences and said support from neighboring countries would also be needed.

Pompeo’s visit comes as Afghanistan prepares for key parliamentary elections in October ahead of next year´s presidential vote.