US and China face uncertain path to trade deal: Report

TEHRAN, July 11 - As the trade war between the world's two largest economies nears the end of its first week, its most unsettling fact may be this: No one seems to foresee any clear path to peace. 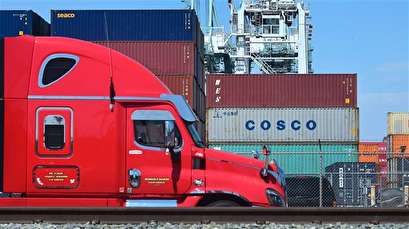 TEHRAN, Young Journalists Club (YJC) - he United States insists that China abandon the brass-knuckles tactics it's used to try to supplant America's technological dominance. Yet Beijing isn't about to drop its zeal to acquire the technology it sees as crucial to its prosperity.

Having run for the White House on a vow to force China to reform its trade policies, President Donald Trump won't likely yield to vague promises by Beijing to improve its behavior — or to pledges to buy more American soybeans or liquefied natural gas.

"It certainly feels like we're in for a protracted fight," said Timothy Keeler of the law firm Mayer Brown and a former chief of staff at the Office of the US Trade Representative. "Truthfully, I don't know what the off-ramp is."

The first shots sounded July 6: The United States slapped 25 percent taxes on $34 billion in Chinese imports. Most of them are industrial goods that the Trump administration says receive subsidies or other unfair support from Beijing. China quickly lashed back with tariffs on $34 billion in US products.

The two countries have targeted an additional $16 billion worth of each other's products for a second round of25 percent tariffs. On Tuesday, the Office of the US Trade Representative proposed 10 percent tariffs on another $200 billion in Chinese imports, ranging from fish sticks to burglar alarms.

All told, Trump has threatened eventually to slap tariffs on up to $550 billion in Chinese imports — more than China actually exported to the United States last year — if Beijing won't relent to US pressure and continues to retaliate.

At the heart of the dispute: The Trump administration's complaints that China has used predatory practices in a relentless push to grant Chinese companies an unfair advantage in the industries of the future, including robotics, electric cars and biopharmaceuticals.

These tactics include the outright theft of trade secrets, government subsidies to homegrown tech firms and demands that US and other foreign companies hand over technology if they want access to China's vast market.

Eliminating the new tariffs will prove a lot harder than it was to raise them in the first place, said Wendy Cutler, a former US trade negotiator who is a vice president at the Asia Society Policy Institute. "Both sides have too much at stake and don't want to back down."

So how does the trade war end? Analysts offer several potential scenarios:

The Trump administration boasts that China has more to lose in a trade war. After all, Beijing sold $524 billion worth of goods and services to the United States last year and bought far less — $188 billion. So China has far fewer goods to tax than the United States does.

And China's benchmark stock index — the Shanghai Composite — has dropped 15 percent this year, at least partly on fears about damage from the trade conflict with Washington.

"It's a dicey time for the Chinese economy," said Claude Barfield, a resident scholar at the conservative American Enterprise Institute and former consultant to the U.S. Trade Representative.

Beijing is trying to contain a run-up in corporate debt and manage a difficult transition away from fast but unsustainable export-driven growth based on exports and often-wasteful investment toward steadier growth built on consumer spending. The International Monetary Fund expects Chinese economic growth to decelerate to 6.6 percent this year from 6.9 percent in 2017.

So it's possible that economic pressure could persuade Beijing to cave. Yet many analysts are skeptical. Eswar Prasad, an economist at Cornell University, said the economic damage from U.S. tariffs is "likely to be muted since China has enough room to forestall a growth slowdown" by increasing government spending or adopting easy-money policies that put more cash into the economy.

Mary Lovely, an economist and trade expert at Syracuse University, says it's unclear how China could appease Trump, even if it wanted to. China has pledged in the past to police cyber-theft and end coerced technology transfers. So any negotiations, Lovely said, would raise more questions: Would the Trump administration accept another promise? How would any promise be verified? How long would it take to determine whether Beijing has actually reformed its ways?

And China's leaders might prove reluctant to back down and risk a backlash from the public. "They have nothing to gain internally by kowtowing to President Trump, and that's exactly what it would be," Lovely said.

Trump faces pressures, too. The Chinese designed their tariffs to inflict political pain in the United States. They have, for example, targeted soybeans and other farm products in a shot at Trump supporters in the American heartland. And US farmers are represented by trade groups and congressional delegations who aren't shy about attacking US policies that threaten farm incomes.

But the president would also find it hard to back down. He's already considered one possible solution only to back away from it. In May, Treasury Secretary Steven Mnuchin announced after a meeting with the Chinese that the trade war was "on hold" and the tariffs suspended after Beijing agreed to reduce the US trade deficit by buying more American energy and farm products.

Yet the cease-fire quickly collapsed once critics complained that the Trump administration was letting China buy its way out of the impasse.

"The president felt the sting of that and didn't like that," Keeler said. So the administration decided to "drive a harder bargain," and it revived — and ramped up — its tariff threat.

Taiya Smith, a former Treasury official who handled negotiations with China, says it's possible a deal could be reached in which Beijing ends its predatory practices but can still keep itself competitive in advanced industries. The key, she says, is persuading China that its tech companies don't need massive assistance from the state.

"Their companies are becoming very powerful," Smith said. "They have to be willing to compete on a level playing field. They no longer need a leg up."

But she said the US would have to make concessions, too, perhaps by agreeing to let China play a bigger role in global economic policy-making.

"The Chinese have to have a political win somewhere in there, too," Smith said. "You can't design something where we get what we want and China gets nothing. They have their own politics."

The war drags on

Scott Paul, president of the Alliance for American Manufacturing and a sharp critic of Beijing's trade practices, wants to see the tariffs remain until either U.S. companies leave China or Beijing opens its market wider to American goods and investment.

"They should stay on for long enough that they manifest some change," he said. "I don't see the tariffs coming off anytime soon."

Paul notes that China has repeatedly made empty promises to reform its practices. "We have waste cans full of promises by the Chinese government to reform its anti-competitive practices that are completely ignored," he said. "The tariffs are the best and only leverage that we have with China, and we would be foolish to squander them without major gains."