TEHRAN, July 18 -A court in Turkey has handed down aggravated life sentences to more than two dozen people on charges of involvement in the failed July 2016 coup attempt against President Recep Tayyip Erdogan, which the Ankara government accuses to have been masterminded by US-based opposition cleric Fethullah Gulen. 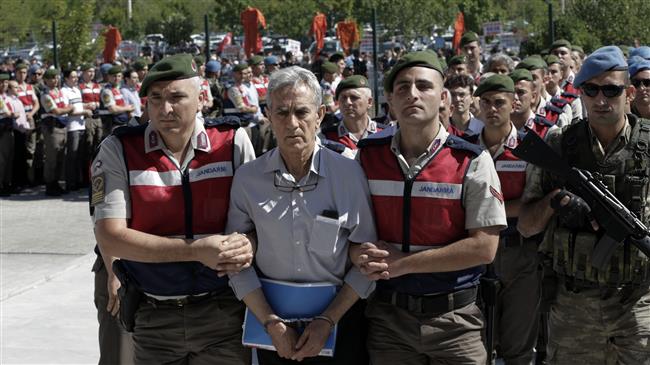 The court also ordered a prison term of 26 years and eight months for Lieutenant Colonel Fazil Ergun for a homicide attempt, and another 13 years and six months in prison for First Lieutenant Ozkan Darendeli “for restricting personal freedom.”

Ergun was reportedly one of two officers, who opened fire on anti-coup officers confronting them at the Gendarme Schools Command headquarters.

US pastor Brunson may be released

Meanwhile, an American pastor, who is on tried in Turkey on terrorism and espionage charges, could be freed on July 18 when the final three prosecution witnesses are due to be heard.

Andrew Brunson, a Christian pastor from North Carolina, was arrested in December 2016 and later indicted on charges of having links with Gulen movement as well as Kurdistan Workers’ Party (PKK) militant group. Brunson has denied the charges, calling them “shameful and disgusting.”

US President Donald Trump has repeatedly called for the pastor’s release. Last month, the US Senate passed a bill, including a measure that prohibits Turkey’s acquisition of F-35 all-weather stealth multirole jet fighters because of Brunson’s imprisonment and Ankara’s planned purchase of Russian-made S-400 air defense missile systems.