Pence to tell China: We will not be intimidated in South China Sea

TEHRAN, October 04 - U.S. Vice President Mike Pence, sharpening U.S. criticism of Chinese policies around the globe, will give China a blunt warning on Thursday that the United States will not back down from what Washington sees as Chinese intimidation in the South China Sea. 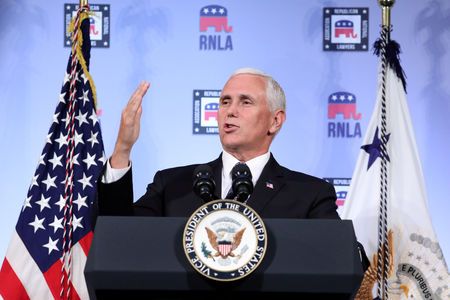 TEHRAN, Young Journalists Club (YJC) - Pence will deliver an 11 a.m. (1500 GMT) address at the Hudson Institute think tank in Washington likely to increase tensions between the United States and China beyond trade disputes that have dominated President Donald Trump's time in office.

In excerpts of his speech seen by Reuters, Pence will call attention to an incident in which a destroyer, the USS Decatur, traveled within 12 nautical miles of Gaven and Johnson Reefs in the Spratly Islands on Sunday.

Pence will say a Chinese naval vessel came within 45 yards (meters) of the USS Decatur "as it conducted freedom-of-navigation operations in the South China Sea, forcing our ship to quickly maneuver to avoid collision."

"Despite such reckless harassment, the United States Navy will continue to fly, sail and operate wherever international law allows and our national interests demand. We will not be intimidated. We will not stand down," Pence will say.

The operation was the latest attempt to counter what Washington sees as Beijing’s efforts to limit freedom of navigation in the strategic waters, where Chinese, Japanese and some Southeast Asian navies operate.

China's Defense Ministry said a Chinese naval ship had been sent to warn the U.S. vessel to leave and that Beijing had irrefutable sovereignty over the South China Sea islands and the waters around them.

"These actions threaten the stability of the Taiwan Strait – and the United States of America condemns them. And while our administration will continue to respect our One China Policy, as reflected in the three joint communiques and the Taiwan Relations Act, let me also say that Taiwan’s embrace of democracy shows a better path for all the Chinese people," Pence will say.

The United States and China are embroiled in a trade war, sparked by Trump’s accusations that China has long sought to steal U.S. intellectual property, limit access to its own market and unfairly subsidize state-owned companies. The two countries have imposed increasingly severe rounds of tariffs on each other's imports.

Despite the tensions, Trump has said Chinese President Xi Jinping is a friend. But at a news conference but last week in New York, he said: “Maybe he’s not any more, I’ll be honest with you."

In New York, Trump accused China of attempting to meddle in the U.S. congressional elections coming up next month, while offering little in the way of evidence. Beijing rejected the charge.

He cited a Chinese government-run media company’s four-page supplement in the Sunday Des Moines Register of Iowa as an attempt to turn voters in that key state against Trump's trade policies.