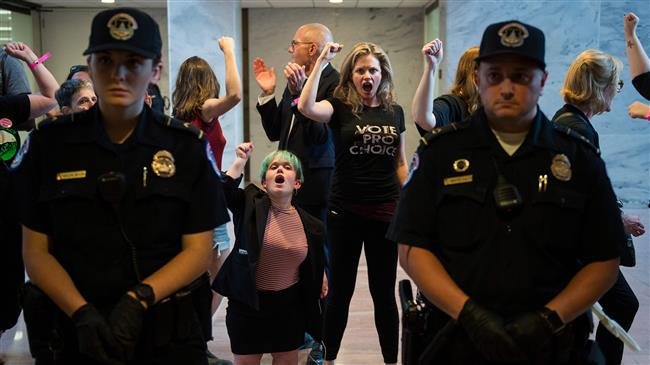 Trump said that Soros and some others are funding the protests against the judge, who has been accused of sexual misconduct by multiple women.

Soros had called Trump a “would-be dictator,” who will fail. “He's only a would-be dictator…I personally have confidence that he’s going to fail… because his ideas that guide him are inherently self-contradictory,”  he said last year.

On Thursday, police in Washington, DC arrested hundreds of protesters after they descended on a pair of Senate office buildings to call on senators to vote against the alleged sex offender.

Protesters, many dressed in black, rallied outside the Supreme Court against Kavanaugh whom the women have accused of sexual misconduct during the 80s.

Some of the signs held by the protesters read "Believe Survivors" and "Kava-Nope". Protesters then crowded into the Hart Senate Office Building after rallying in front of the Supreme Court. Hundreds of them, including actress Amy Schumer, were arrested.

A number of women have approached lawmakers to share their stories of surviving sexual assault allegedly launched by Kavanaugh.

Republicans, in the meantime, said Kavanaugh had been exonerated by the FBI of sexual assault allegations.

They plan to hold a key procedural vote on Friday and a final vote on Saturday to approve Kavanaugh for a lifetime job on the top US court.

Republicans control the Senate by a 51-49 margin.

The approval of the conservative Kavanaugh for the position would place the Supreme Court under Republican influence.