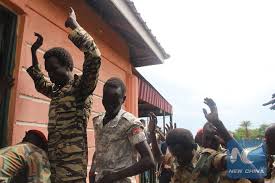 TEHRAN, Young Journalists Club (YJC) -  One of the detainees told Reuters by phone from the centre that he and many other others were political prisoners, held without trial, and were demanding their release.

"We are about five metres apart from the government forces. They are trying to force us to lay down our arms. We need international guarantors like the Red Cross. We will not surrender,” Kerbino Wol said.

"All political prisoners and detainees need to be released or given fair trial. The lack of trials is illegal," he added.

Reuters could not confirm his account independently. A South Sudanese government spokesman could not immediately be reached for comment.

The prisoners were caught in a stand off with guards and the centre, called Blue House, had been sealed off, the security source said.

"Prisoners have taken over the facility from inside through the help of some officers," the security source told Reuters.

South Sudan has been gripped by conflict since late 2013 when rivalry between President Salva Kiir and his former deputy Riek Machar deteriorated into clashes between their supporters, then civil war.

Last month Kiir's government signed a peace agreement with his opponents to try and end the war which has uprooted a quarter of the country's 12-million-strong population and devastated the economy.

On Oct. 1 the president's spokesman, Ateny Wek Ateny, told local broadcaster Radio Tamazuj that all political detainees had been released, under the terms of a separate agreement.

Wol said he was detained in April and has been held without charge ever since.