Kavanaugh may be impeached by Democrats in Congress after midterms

TEHRAN, October 07 - Some members of the Democratic Party in the US Congress are drawing up plans to impeach Supreme Court Justice Brett Kavanaugh, who was recently appointed to the nation's top court despite facing multiple allegations of sexual assault. 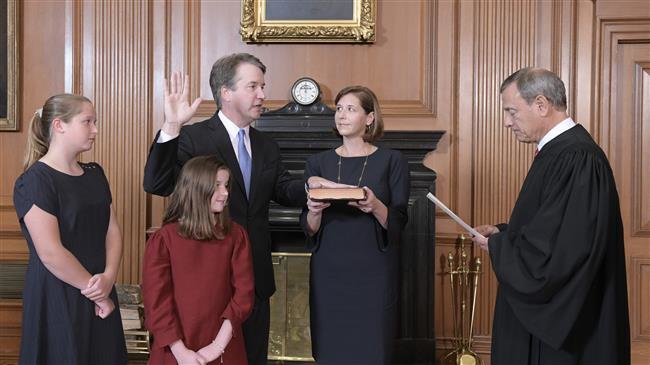 TEHRAN, Young Journalists Club (YJC) -he US Senate confirmed Kavanaugh by a very narrow margin of 50 to 48 votes on Friday, a decision that further divided the country along partisan lines.

While the FBI has cleared Kavanaugh from accusations leveled by Christina Blasey Ford and Deborah Ramirez,, his opponents argue that a more thorough investigation is needed.

They are hopeful that a landslide victory for Democrats in the November 6 midterm congressional elections would allow for that.

Democratic Representative Jerrold Nadler, who would become head of the House Judiciary Committee if Democrats win the House of Representatives, has already indicated that he would reopen an investigation into Kavanaugh’s case.

"Accountability is what has been missing under the Republicans," he recently said a weekly Democratic gathering. "This is something we have to address, in the interest of the American people and for the health and future of our democracy."

Additionally, 40 members of the Congressional Progressive Caucus have written to President Donald Trump, warning him that Kavanaugh’s impeachment was still an opportunity.

"If a careful examination of the entire scope of his legal history — thus far withheld from the Senate — demonstrates that Mr. Kavanaugh lied under oath, the constitutionally prescribed remedy would be impeachment proceedings," the lawmakers wrote.

Meanwhile, an online petition to impeach the controversial judge has received over 125,000 signatures over the past days while progressive groups have started to raise money to expel him from the high court.

Even House Minority Leader Nancy Pelosi, who has rejected Democratic plans to impeach Trump, says she is not against the idea although it "would not be my plan.”

It should be noted that in order to impeach a federal officials, Democrats would need a majority of the House to but it would take a supermajority of the Senate, or 67 votes, to remove the official from his post.

This means that even if the Democrats manage to win both chambers of Congress, they would still need some Republican help to impeach Kavanaugh and Trump.

Trump and his team have used the possibly of an impeachment to encourage voting Republican on November 6.

Kavanaugh was sworn in as the 114th Supreme Court justice on Saturday. His lifetime appointment gives Republicans a 5-4 majority in America’s highest court.