TEHRAN, November 11 -Extremist Israeli settlers have blocked a road leading to the main commercial crossing to the besieged Gaza Strip in an attempt to prevent truckloads of basic supplies from entering the Palestinian enclave. 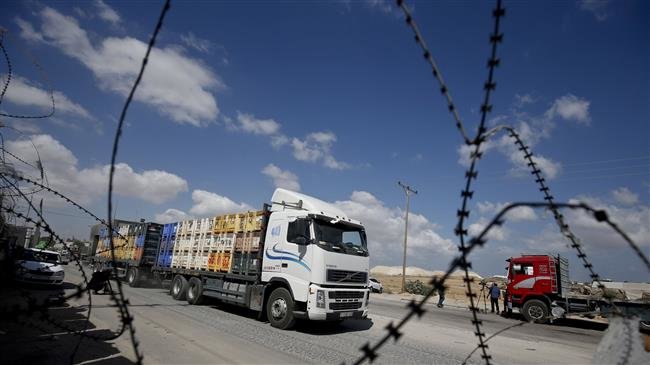 The angry settlers said the road blockade had to do with fires from incendiary kites and helium balloons that have been flown by Palestinians since the “Great March of Return” protests began on March 30.

Kerem Shalom crossing between the southern Gaza Strip and the occupied territories is Gaza's main entry point for goods and trade.

This is not the first time that Israeli settlers as well as soldiers attempt to prevent goods from entering Gaza. The Tel Aviv regime has routinely closed the crossing, banning the entry of humanitarian supplies and other goods into Gaza.

In August, Israel tightened its years-long blockade of the coastal strip by closing a pedestrian crossing.

There are three crossings into Gaza: two are controlled by Israel and one by Egypt.

One of the only two Arab countries that have open relations with Israel, Egypt has blockaded the rest of the strip, including by shutting the Rafah border crossing.

Gaza has been under a crippling siege since 2007 and witnessed three wars since 2008.

More than 220 Palestinians have so far been killed and over 20,000 others wounded by Israeli troops in the protests since late March.