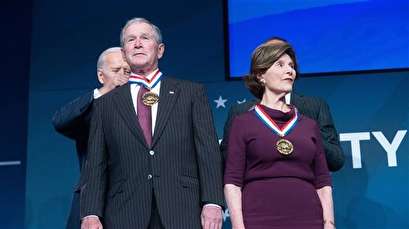 “I am incredibly proud along with Laura to receive the Liberty Medal and I thank the National Constitution Center and its board for this high honor,” Bush said Sunday after receiving the award in Philadelphia.

The medal is awarded to recipients for their commitment to veterans.

“It is not about again Democrats or Republicans,” said former Vice President Joe Biden, who presented the medals. “It’s about who we are. It’s about standing up for men and women who put their lives on the line to defend us every single day.”

The Bushes received the medal on Veterans Day, which in Europe is known as Armistice Day.

This Armistice Day also marked the 100th anniversary of the end of World War I, which took tens of millions of lives for reasons that historians have found it difficult to explain to this day.

A group of veterans blocked the entrance to the National Constitution Center, protesting the irony that Bush was given a medal that is supposed to go to leaders "who have strived to secure the blessings of liberty to people around the globe."

Activists from Veterans Against The War, a group of post-9/11 service members and veterans, rallied near the Arch Street entrance between 5th and 6th Street, chanting, “No awards for endless wars.”

The group aims to end “a foreign policy of permanent war and the use of military weapons, tactics and values in communities across the country,” it said in a statement.

Following the terrorist attacks on September 11, 2001, the United States, under then President Bush, attacked Afghanistan, a war which just entered its 18th year last month, and later invaded Iraq. The wars are estimated to have killed over one million people.

Bush also presided over the creation of the controversial Department of Homeland Security, as well as the massive expansion of the Guantanamo Bay prison in Cuba to hold terror suspects indefinitely under conditions of torture.