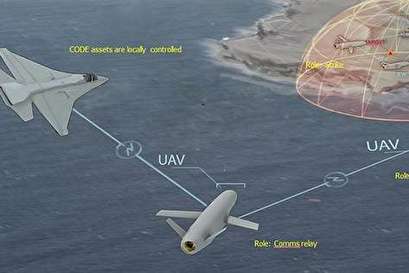 In the test, deployed CODE-equipped unmanned aerial systems adapted to unexpected threats in an anti-access area denial environment. The drones shared information, planned and allocated mission objectives and tactical decisions among themselves, and operated with a minimal of communications to represent possible enemy jamming.

The tests began with the mission commander interacting with and directing the drones until communications were deemed degraded or cut off. The CODE vehicles then autonomously continued the mission plan without live human direction and communicated with each other on the best ways to accomplish their objectives. This ability would be vital towards long range engagements of mobile ground and maritime targets in high-threat or denied areas, according to DARPA.

"The test series expanded on previously demonstrated approaches to low bandwidth collaborative sensing and on-board planning. It demonstrated the ability to operate in more challenging scenarios, where both communications and GPS navigation were denied for extended periods," DARPA program manager for CODE Scott Wierzbanowski said in a release.

During the three-week ground and flight series up to six live and two-dozen simulated drones served as surrogate strike platforms. The drones then autonomously located and engaged pre-planned and pop-up targets guarded by a simulated air defense system in communications and GPS jamming conditions.

"The demonstrated behaviors are the building blocks for an autonomous team that can collaborate and adjust to mission requirements and a changing environment," Wierzbanowski said.

Development of CODE and the infrastructure involved will continue to fall under DARPA until its completion in the spring of 2019, when it will transfer to Naval Air Systems Command.