TEHRAN, November 22 -Iran and Italy have discussed the Special Vehicle Purpose (SPV), a payment mechanism being devised by Europe to facilitate trade with Iran in the face of US sanctions. 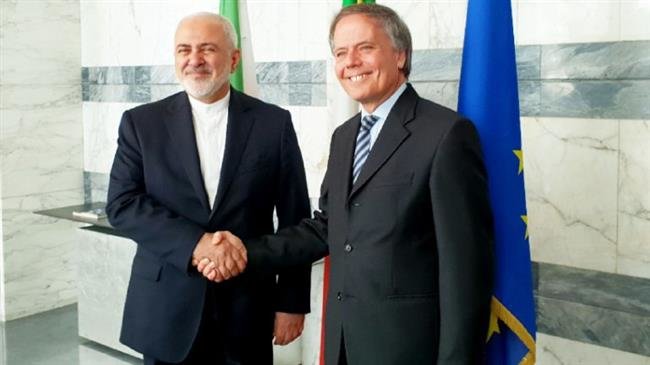 “The US has violated not only the JCPOA, but also the UN Security Council Resolution 2231 and now it is urging others to do the same and threatens to punish the countries that respect it,” Zarif said, referring to the nuclear deal and the UN resolution which endorsed it.

Zarif is in the Italian capital on an official visit to attend the Mediterranean Dialogues Conference (MED).

The Italian foreign minister said the JCPOA helps promote international peace and security, stressing that Rome will make all-out efforts to help protect it along with other EU countries.

Talks between Iran and the European side come a week after the US special envoy for Iran threatened European banks and firms with fresh sanctions if they apply the SPV.

The SPV is an alternative payment mechanism that can help companies trade with Iran without facing US penalties.

Despite Washington’s withdrawal from the Joint Comprehensive Plan of Action (JCPOA) in May and re-imposition of sanctions on Tehran in November, the Europeans have reaffirmed their commitment to the JCPOA, as have Russia and China.

Iran has not left the landmark nuclear deal yet, but stressed that the remaining signatories to the agreement have to work to offset the negative impacts of the US pullout for Iran if they want  Tehran to remain in it.

In their Thursday meeting, Zarif and Milanesi also pointed to historic, broad and growing ties between the two countries, highlighting their political will to develop and deepen ties in various political, economic, cultural and international fields.

The two sides also discussed efforts to promote economic and cultural cooperation, particularly in the fields of tourism and science, among others.

Regional issues, particularly the latest developments in Syria, the disastrous situation of Yemen, and Libya developments were among other topics discussed in the meeting.

Later in the day, Zarif attended a meeting with dozens of Iranian expatriates living in Rome.

Addressing the gathering, Zarif said the development of Iran is not possible without having interaction with the world, but “we shouldn’t be dependent on others.”

He also referred to Iranian expatriates as bridges that connect the Iranian-Islamic culture and identity to others, describing them as the country’s envoys for dialogue, interaction and mutual understanding.