Frogs get stressed out by traffic, too

TEHRAN, November 24 -Frogs from quiet ponds get stressed when exposed to traffic noise, but frogs from noisy ponds are used to the racket. 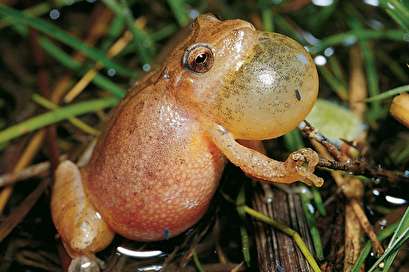 TEHRAN, Young Journalists Club (YJC) -Frogs from quiet ponds get stressed when exposed to traffic noise, but frogs from noisy ponds are used to the racket.

Sonic stress can disrupt the health of amphibians, according to a new study. But the research suggests animals can adapt to tolerate loud noises.

New analysis of frogs from noisy and quiet ponds revealed two different stress and immune profiles. Researchers described the differences in a new paper published Wednesday in the journal Proceedings of the Royal Society B: Biological Sciences.

When scientists exposed frogs from quiet ponds to the noises of a busy highway, the amphibians became stressed. In addition to producing more of the stress hormone corticosterone, the frogs also experienced changes to their immune profile.

"Antimicrobial peptides are components of the immune defense system that provide important protection against pathogens like bacteria and fungi," Louise Rollins-Smith, professor of pathology, microbiology, and immunology at the Vanderbilt University School of Medicine, said in a news release. "Brevinin-family peptides in particular strongly inhibit the fungal pathogen that causes the infectious disease chytridiomycosis, or chytrid, which is responsible for widespread mortality of amphibians around the world."

Frogs living in ponds next to busy highways aren't helpless. Researchers found frogs collected from noisy ponds had adapted by lowering their stress response, thus reducing the negative impacts on their immune systems.

When frog eggs collected from noisy ponds were raised in the lab and exposed to traffic noise, the frogs failed to increase their corticosterone production.