TEHRAN, November 25_President Hassan Rouhani says the real problem with the enemies of Iran is that it refuses to remain ignorant vis-à-vis their atrocities in the region. 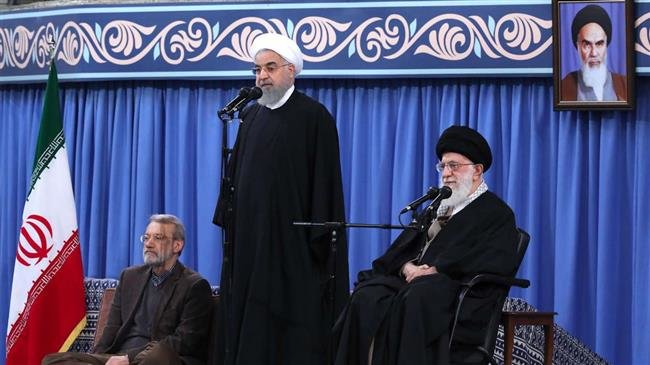 TEHRAN, Young Journalists Club (YJC) _President Hassan Rouhani says the real problem with the enemies of Iran is that it refuses to remain ignorant vis-à-vis their atrocities in the region.

The enemies of the nation want all but one thing from it and that does not have to do with the nuclear issue or the elements of the 2015 agreement between Tehran and world countries at all, he said.

“They want to do whatever they want in the region, and for us to close our eyes on it,” Rouhani said during a meeting between Leader of the Islamic Revolution Ayatollah Seyyed Ali Khamenei and participants of an international Islamic unity conference in Tehran on Sunday.

“They say ‘if we oppressed Iraq and Afghanistan and created insecurity in Syria and North Africa, you should not bear witness to it and stay silent,’” the president said.

The enemies, Rouhani noted, wanted the Islamic Republic to refrain from supporting the oppressed, despite their attempt to bring about domination of Takfiri terrorists in the region.

“Our path is clear. We consider our regional neighbors to be our brothers and the regional security to be aligned with our own security, and extend the hand of friendship to all Muslims,” the Iranian chief executive said.

“Today, after the lapse of centuries, Takfir and sanctions have been juxtaposed,” Rouhani said, calling those trying to bring the country under sanctions “a bunch of vainglorious people, whose talk does not have any buyers.”

The president said the Iranian nation was not afraid of threats issued by foreign powers, oppression and Takfir, which is the practice of considering people of other faiths to be apostates.