TEHRAN, November 28 -China will widen market access for foreign investors and step up protection of intellectual property rights, China’s President Xi Jinping said on Wednesday ahead of the G20 meeting of world leaders in Argentina. 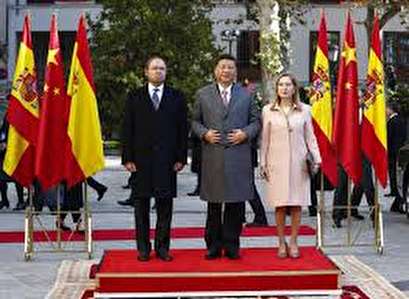 Speaking before the Spanish upper house of parliament during a two-day stop in Madrid, Xi also said China planned to import $10 trillion worth of goods over the next five years.

Xi made no reference to U.S. President Donald Trump, who on Monday said he expected to move ahead with raising tariffs on $200 billion in Chinese imports to 25 percent from the current 10 percent.

Two very small groups of demonstrators, one expressing opposition to China’s human rights record and one waving a “Welcome” sign, gathered outside the senate as the Chinese leader spoke.

Xi and his wife Peng Liyuan earlier stood side by side with Spain’s King Felipe and Queen Letizia in the crisp Madrid winter sun outside the Royal Palace to receive full military honors from the king’s guards.

China and Spain will on Wednesday sign an accord on the export of Iberian ham to China, as part of a series of deals to be inked during the state visit.

But Spain will not sign up to Beijing’s “Belt and Road Initiative,” a wide-ranging development strategy adopted by the Chinese government involving global infrastructure projects, a Spanish government source said.