TEHRAN, December 16 - Tens of thousands of Palestinians have attended a huge rally in the besieged Gaza Strip to mark the 31st anniversary of the establishment of the Hamas resistance movement. 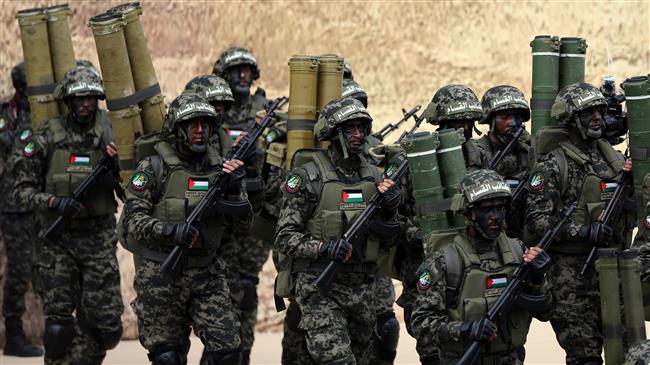 TEHRAN, Young Journalists Club (YJC) - Hamas was established in 1987 soon after the first Palestinian Intifada or uprising broke out against the Israeli occupation. The movement has been administering Gaza since 2007 when it scored a surprise parliamentary victory.

On Saturday, Hamas marked the anniversary of its foundation with a military parade featuring the Palestinian resistance movement’s new defensive hardware.

The ceremony was held in the southern city of Khan Yunis in the Gaza Strip which is ruled by the movement.

The movement's special units staged a march-past during which truck-mounted missile defense systems were driven through the streets.

The movement also honored its fighters who outed and neutralized an Israeli infiltration near Khan Yunis last month.

Undercover Israeli special forces infiltrated into the territory in a civilian car near Khan Yunis, opening fire and killing local commander Noor Baraka when they were discovered.

The unit was chased by Hamas fighters who killed a ranking Israeli officer. Israel then launched dozens of airstrikes on Gaza, drawing Hamas retaliation. During a two-day flare-up, more than 500 rockets were fired at Israel, forcing Tel Aviv to accept a hasty declaration of a ceasefire.

The Saturday ceremony also coincided with the anniversary of the first Palestinian Intifada, which broke out in 1987 after four young Palestinians were killed by Israeli soldiers at a checkpoint in Gaza as well as the shooting death of a 17-year-old boy during an unarmed protest.

An Arabic word that literally translates to "shaking off," Intifada has been used to refer to legitimate means of resistance against oppression across the Middle East for decades. In the Arab-Israeli conflict, it means a concerted Palestinian effort to shake off Israeli occupation and gain independence.