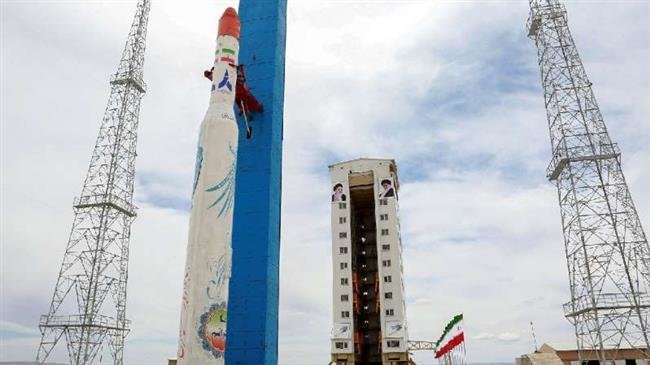 TEHRAN, Young Journalists Club (YJC) - "The structure of our satellites and the launch pads used for them are different from those used for launching military missiles. This [satellite] activity is civilian, and we need this technology for weather forecast," Foreign Ministry Spokesman Bahram Qassemi told a news conference on Monday.

The official insisted that Iran will certainly not wait for agreement from foreign parties to launch its satellites, saying, "As an independent country, Iran is entitled to make use of all technologies that facilitate its progress. For that matter, the country does not wait for anyone’s opinion or consent."

Just recently, US Secretary of State Mike Pompeo claimed that Iran’s planned launch of space rockets and missiles were in breach of the United Nations Security Council Resolution 2231. The document endorses the Islamic Republic's 2015 nuclear agreement with world countries.

Tehran maintains that its missile tests are not banned under the nuclear agreement nor the UNSC resolution, because the missiles are not designed or manufactured in a way to deliver nuclear warheads.

Qassemi refuted the remarks made by Pompeo and French officials as “wrongful and inapt.”

Separately, he complained about Europe’s slow progress introducing the Special Purpose Vehicle (SPV), a payment mechanism aimed at facilitating business with Iran in the face of US sanctions.

"Our perception is that this issue is facing much delay. We are not going to await Europe's decision in this regard," Qassemi added.

A note of warning to Poland

The spokesman has also advised Poland against compromising mutual ties by hosting a US summit against Iran in the hope of currying favors with Washington.

"The great human heritage and relations between Iran and Poland should not be ignored and destroyed through a short-term and futile political measure," Qassemi told IRNA.

"It looks like Poland has ended up on the path of the White House's anti-Iranian behavior and policies as a result of the United States' promises and pressures," he noted.

The official reminded that the countries' relations date back more than five centuries and that Iran hosted upwards of 120,000 Poles during World War II.

Warsaw hosts Iran-Poland Friendship Symbol, Qassemi said, advising Polish officials to pay a visit to the stone slate, which has been set up to honor the two countries' shared past.

Qassemi warned that Poland's decision will certainly be followed by Iran's "serious and uncompromising response," and hoped that Warsaw will still reconsider hosting the event.

US Secretary of State Mike Pompeo said on Friday that the summit was to go underway on February 13-14. He said it would focus on stability and security in the Middle East, including the “important element of making sure that Iran is not a destabilizing influence.”

Qassemi said the summit represented US efforts to divide the European Union over Iran. He said the current antagonism on the part of American officials towards Iranians is no secret and that the gathering has been organized against the background of such animosity.

Warsaw's decision contradicts the EU's policies on Iran, the spokesman said, calling it "wrong and unacceptable."

The EU has been trying to set up a mechanism to avoid US sanctions against Iran that came back into force after Washington quit a 2015 nuclear agreement with the Islamic Republic.

'US to betray Poland'

Qassemi said that Polish officials are definitely wrong by assuming that hosting the US summit will help them gain special advantages.

"There has been no shortage of countries and leaders, who have committed such miscalculations concerning Iran. Eventually, however, they have been left with nothing beyond a bad and dark precedent in the annals of their relations with the Iranian nation," the official said.