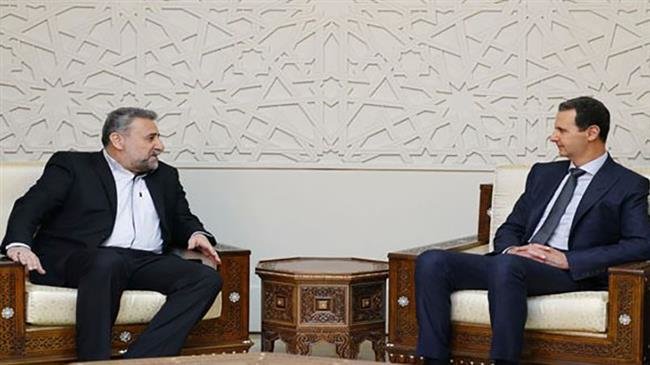 During the meeting, Assad said relations between Damascus and Tehran have always been based on moral principles and respect for the two nations' will to determine their own fate and build their future without any foreign interference.

He added that such an approach has contributed to the independence of the two nations.

The Syrian president also stressed the need to take Tehran-Damascus ties as the basis for creating a bigger network of relations, especially with countries that agree with Syria and Iran in this approach.

For his part, Falahatpisheh said Iran and Syria have a strong position in the region thanks to their deep-rooted cultural heritage.

However, some countries are standing on shaky ground, because they have adopted immoral policies in violation of international law, whether by using terrorism as an instrument to serve their interests, or by imposing sanctions on countries, which disagree with them, the senior Iranian lawmaker added.

Assad and Falahatpisheh also agreed on a host of various issues pertaining to the regional and international developments and the need for continuing coordination between the two countries.

During a previous meeting between Hossein Jaberi Ansari, the senior assistant to the Iranian foreign minister on special political affairs, and President Assad in Damascus in November, the two sides pledged to keep counterterrorism cooperation and to counter US bids to revive terrorists and create obstacles to prolong the war in the Arab country.

Stressing the importance of Syrian-Iranian relations as a factor of stability, the two sides reaffirmed both nations’ determination to continue combating terrorist groups operating across the region.