TEHRAN, Jan 15 -An explosion and gunfire have been reported in the Kenyan capital, leaving at least seven people dead, with al-Qaeda-linked al-Shabab militants claiming responsibility for the attack. 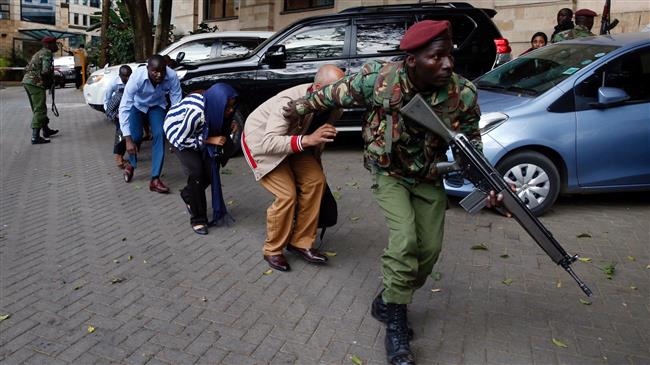 TEHRAN, Young Journalists Club (YJC) -At least one explosion and gunshots rang out at the Dusit upscale hotel and office complex on 14 Riverside Drive in Nairobi on Tuesday afternoon, sending workers fleeing for their lives as others cowered under their desks.

"A group of unknown armed assailants attacked the Dusit Complex in what we suspect could be a terror attack," Kenya police chief Joseph Boinnet said.

One person died in hospital and eight were injured, according to hospital officials.

Later on, six dead bodies were removed from buildings near the hotel, according to witnesses.

Police warned the attack may still be ongoing, with the gunmen still inside the complex.

"I just started hearing gunshots, and then started seeing people running away raising their hands up and some were entering the bank to hide for their lives," a woman working in a bank in the complex said, adding she had heard two explosions.

"We heard a loud bang from something that was thrown inside. Then I saw shattered glass," Geoffrey Otieno, who works at a beauty salon in the complex, said, adding, "We hid until we were rescued."

"We are behind the attack in Nairobi. The operation is going on," said Abdiasis Abu Musab, the group's military operations spokesman.

The police were already treating the incident as a potential terror attack.

Kenya has frequently been targeted by al-Shabab terror attacks, and also suffers from violent robberies.

Kenya sent troops across the border to Somalia in 2011 to fight al-Shabab. The group has vowed to fight back.

Al-Shabab, which has been an al-Qaeda affiliate since 2012, has been designated as a terrorist organization by many countries.

In neighboring Somalia, the militants have been pushed out of all major urban strongholds and ports but continue to stage attacks on targets in smaller, more remote areas.