US gained nothing after spending $7,000bn in Iraq, Syria: Iran military chief

TEHRAN, Jan 20 - Iran's top military commander says although the United States spent a total of 7,000 billion dollars in Iraq and Syria, it has achieved nothing while the Islamic Republic gained a lot despite its very low spending in those countries. 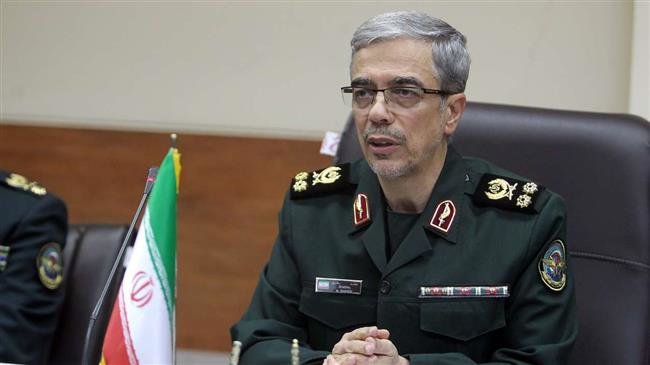 “If Americans spent 7,000 billion dollars in Syria and Iraq and achieved nothing, what we spent [in those countries] was very low, but [we had] all these important and strategic results and achievements due to perseverance, jihad, hard work, good thinking, [as well as good] management and guidance,” Iran's top commander added.

He noted that the Islamic Republic and the resistance front have succeeded in making major breakthroughs in the fight against Takfiri terrorism in the Middle East.

Baqeri emphasized that Daesh has been dismantled in Syria and Iraq and said, "Despite all efforts by enemies, countries that created terrorist [groups] are now standing in line to open their embassies in Syria and Iraq."

Iran's top military commander added that the enemy is increasing its security, cultural and soft threats against Iran in a bid to create a gap between the Iranian nation and the Islamic establishment with the purpose of making people give up their belief in the Islamic Revolution's ideals.

"The enemy is currently taking advantage of new methods like cognitive warfare and development of psychological operations in order to achieve its ominous goals," Baqeri said.

In a reversal from previously stated US policy, President Donald Trump ordered early in December a “full” and “rapid” withdrawal of US troops from Syria as he vowed the United States would no longer be the "policeman of the Middle East."

Late in December, US President Donald Trump defended his decision to withdraw American troops from Syria, saying he is "just doing what I said I was going to do" during his 2016 election campaign.

"... I campaigned on getting out of Syria and other places. Now when I start getting out the Fake News Media, or some failed Generals who were unable to do the job before I arrived, like to complain about me & my tactics, which are working," Trump wrote on Twitter.

In reaction to Trump's decision, Baqeri said the United States is only fueling insecurity in the Persian Gulf through its presence in the strategic region.

Speaking to reporters in the southern Iranian port city of Bandar Abbas, the top Iranian military chief said the US president's plan to withdraw troops from Syria was of no significance for defensive and security missions in the region.