TEHRAN, Jan 22 -Venezuelan crude oil production continued its steady decline and hit a new low in December with just 1.15 million barrels per day produced, unwillingly contributing to the OPEC agreed production cut even as it had an exemption. 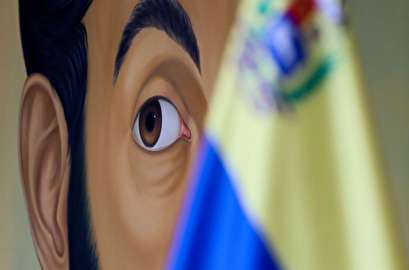 OPEC agreed in December on production cuts -- but it had exempted Venezuela.

OPEC uses secondary information for its own estimate of production changes by member countries. But it also informed that Venezuelan officially reported to OPEC that its December output was nearly 1.5 million barrels per day, or 47,000 barrels per day more than in November.

According to a March report by the U.S. Energy Information Administration, Venezuela, which holds the world's biggest crude oil reserves, is seeing productivity declines because of mismanagement.

The government of President Nicolas Maduro, which continues the policies of his predecessor Hugo Chavez, has failed to maintain active production rigs for several reasons. Those include "missed payments to oil service companies, a lack of working upgraders, (and) a lack of knowledgeable managers and workers," the EIA said.

The December production level is the lowest in the past two decades, except for a brief period immediately after Chavez responded to a December 2002 general strike by PDVSA company workers, part of a failed bid to oust him.

Sixteen years ago, Chavez fired over 35 percent of the PDVSA workforce, or over 12,760 qualified workers and management, who were replaced by party affiliates and associates.

As a result, Venezuela, a country with an estimated 303 billion barrels of crude oil reserves, steadily moved further and further away from production levels of well over three million barrels per day in the mid-1990s.

Oil production has traditionally been the biggest source of revenue in Venezuela, a country struggling with mismanagement on other fronts -- but particularly in economic areas -- with an estimated 1.7 million percent accumulated inflation last year, according to the opposition-led National Assembly. Venezuela has not made any inflation figures public since 2015.

Political violence and repression, much of it by the country's security forces against citizens, last year gave Venezuela the biggest rate of homicide in Latin America. The violence, coupled with food and medicine scarcity, has led to the exodus of three million Venezuelans in recent years, according to United Nations data.

Maduro this month started a second government term following 2018 elections that saw an unprecedented proportion of the Venezuelan population not participating. As a result, the United States, the European Union and many Latin American countries have not recognized the legitimacy of this new term, though countries like China, Russia and Mexico do.

Concern that an economic collapse of Venezuela could reduce crude oil supplies and cause a sudden shift in the world's market balance had an impact on rising prices at some points during 2018, traders said at the time.

The political and economic outlook for Venezuela appears complicated in 2019. The year started with the leader of the National Assembly asking the military to stop supporting Maduro because the alleged illegality of his second term means the presidency is vacant. The military, however, has pledged its support for Maduro.

In December, Venezuela assumed the rotating presidency of OPEC for a one-year period. The post is held by a military general accused of using violence to halt protests, according to The Wall Street Journal.

OPEC reported Thursday it reduced 751,000 barrels per day of crude oil production in December, most of it on purpose as member countries led by Saudi Arabia want to reduce output to help crude prices rise. The total December production was 31.6 million barrels.

Libya, which had also been exempted from the production cuts announced Dec. 7, saw a 172,000-barrel-per-day month-over-month December reduction, but this was the impact of oil fields shut down after they were occupied by a militia.

Iran, which is facing the threat of U.S. nuclear-related sanctions, but was also exempted from the cuts, saw a 159,000-barrel-per-day December month-over-month decline to 2.8 million barrels per day. Because of the sanctions, which did not go into effect on Nov. 5 due to waivers that expire in March, Iran has seen buyer countries seeking alternative sources because of uncertainty.