TEHRAN, Jan 23 -For Allison Schwaegel, an air traffic controller at St. Louis Lambert International Airport, the federal shutdown became all too real last week when she received a pay stub with "zero" payment. 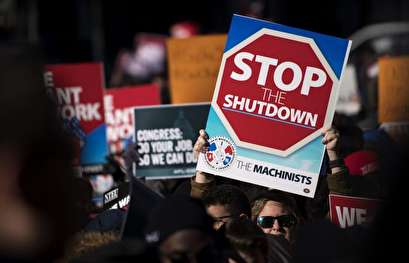 TEHRAN, Young Journalists Club (YJC) -Schwaegel is one of the 800,000 federal employees caught in the government shutdown, which is now in its fifth week. She's married with two children, is the primary breadwinner in her family and missing a paycheck is yet another challenge in her already high-stress profession as an air traffic controller.

Her tower has been shorthanded, forcing her and her co-workers to work six-day weeks for about two years. Just when the facility hired new controllers, giving them a break, the government closed Dec. 22.

"We have a critically staffed facility," Schawaegel told UPI. "We just got eight [new controllers]. Just as we started to see light at the end of the tunnel, this happens. It's frustrating to have the solution at our fingertips and they can't train."

The staffing issue is just one of many that face air traffic controllers. While Schwaegel and her colleagues work without pay, much of her support staff -- who do everything from training to dealing with runway issues -- are furloughed.

"Like a doctor who relies on a nurse, we rely on staff for training, interpretation of rules, helping us deal with the airport authority and runway closures," Schwaegel said. "Certain things like that are not getting done. This just adds to another level of stress."

While Schwaegel hopes she'll eventually get paid, that's not the case for Kenneth Thompson and Pablo Lazaro -- cafeteria cooks at Washington, D.C.'s Smithsonian's National Museum of the American Indian.

Because they are contract workers, they aren't eligible for back pay. So every day the shutdown goes on, it's money they'll never recover.

"Everything is coming due," Thompson, who's worked for the same contractor for 15 years and had built up some savings, told UPI. "I'm getting down to my savings now. The thing about it, you can talk to [bill collectors] and they're patient with you, but they are still tacking on late fees, interest and whatever.

"In the long run, it's not really helping you because you're going to have to pay all of the extra money, and you're not getting any extra money in your pay in return."

Lazaro, who's worked with the contractor for more than a decade, said he fears for his family and two young children because he's on the verge of missing a mortgage payment that he used to pay on time faithfully. He's been able to find a part-time job, but it won't pay a fraction of his bills.

"I've been applying for jobs because it's been slow, because it's at the beginning of the year," Lazaro told UPI, emphasizing that companies are now shedding the extra help they hired during the holiday season. "It's so sad right now because I don't know what's going to happen."

Thompson said many employers also are concerned about hiring furloughed federal workers because they're considered short-term. Instead, he says, they opt to invest in new employees they don't have to worry about losing after the shutdown.

"They pretty much don't want to mess with you when they find out you're furloughed," Thompson said. "Everybody's just struggling with the unemployment. They have families and stuff like that. A lot of new workers are living paycheck to paycheck. That adds another complication."

Thompson had a rare laugh when asked if he's seen any truth to Trump's much criticized claim that federal workers want the border wall and support the shutdown.

"That is a falsehood," Thompson answered. "He promised that Mexico would pay for it. Now he's holding us hostage because he couldn't keep his promise.

"He's using us as pawns and people are hurting out here."

Schwaegel said air traffic controllers cover a wide political spectrum, but their feeling about sacrificing pay for the border wall has been pretty universal.

"I cannot imagine a reason that's important enough to shut down the government," she said. "The government needs to be up and running. This is a matter of public safety. Why comprise one area of public safety for another? They're not connected and it's quite frustrating that we've become political pawns.

"I can speak for some, but not all of my workers. I have not heard anyone I work with say that they support the shutdown, no matter what side of the aisle they're on. Not a one."

The Washingtonian reported some furloughed workers have resorted to selling their belongings on the Internet -- vehicles, televisions, guitars, vacuums and camping gear -- to make up for lost pay. Others are holding sell-all garage sales to make ends meet.

A coalition of nonprofit organizations started a pop-up food pantry at the U.S. Coast Guard Academy in Connecticut to help members and academy workers, the Navy Times reported last week.

Schwaegel said the difficulty has not made her co-workers any less dedicated. After heavy snow fell in St. Louis last weekend, she said, two controllers slept in the office to make sure they were at work the next day.

"That speaks to their integrity and professionalism, knowing they're not getting paid but they go above and beyond to sleep at work so they're not leaving the morning crew short," she said.