TEHRAN, Jan 23 -In 2018, 23 slayings occurred in El Paso, Texas, representing a low rate characteristic of U.S. cities that border Mexico. But it's a different story just over the international line in Juárez, a low-wage, export-oriented manufacturing powerhouse of hundreds of factories known as maquiladoras. 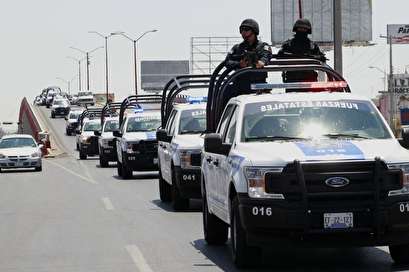 TEHRAN, Young Journalists Club (YJC) -Juárez and El Paso may be minutes from each other -- connected by four international bridges -- but in terms of homicidal violence, they might as well be worlds apart.

"The reason people don't kill in El Paso is that the cases are investigated, like in much of the United States," said Sandra Rodríguez, author of La Fábrica del Crímen, which describes how impunity feeds a cycle of violence in Juárez.

For years, Juárez has been infamous as a place where women are systematically killed, their cases languishing in a broader impunity affecting much of Mexico.

Mexico has the highest rating for impunity -- exemption from punishment or freedom from consequences -- of any country in the Americas, according to the Global Impunity Index. Its national statistical office, INEGI, reported in 2017 that 93.2 percent of crimes in Mexico go unreported. Mexico's impunity rating afflicts Ciudad Juárez, which is dominated by organized crime engaged in trafficking of drugs and people, and where socioeconomic inequality feeds violence.

Rodríguez said violence is on the rise in Juárez, with 145 homicides since Dec. 2.

"People murder other people in Juárez because nothing is going to happen to them," said Rodríguez, who has lived in Juárez for 25 years, spending 15 as a journalist covering the city's descent into an "empire of impunity where you can commit any type of crime."

Last year was Juárez's bloodiest since 2008 to 2010, a period when the city was the most violent in the Americas. The violence eased between 2014 and 2016 when the city saw a drop in homicides.. Weakened by arrests of high-level drug traffickers and years of militarized policing, organized crime factions stepped away from a bitter struggle to control Juárez's lucrative drug-trafficking routes, known in Spanish as la plaza.

Two years ago, these factions began to fight anew -- to control the Juárez plaza and to dominate supplying the city's burgeoning appetite for methamphetamines.

Homicides have resurged in Juárez. In 2017, there were 772 homicides. In 2018, homicides rose to 1,247, according to the Chihuahua State Prosecutor's Office, a threefold increase over 2014.

"It's not somehow a miracle that El Paso and San Diego are relatively safe while they border on these festering hells of Ciudad Juárez and Tijuana," said Everard Meade, director of the Trans-Border Institute at the University of San Diego, California. And it has nothing to do with a border wall dividing them.

Meade said much of Mexico's crime is driven by a black market for illegal drugs run by organized crime figures who use violence to terrify people.

"There's nothing like hanging dismembered bodies, or leaving terrifying messages on the corpses, or taking videos of forced confessions and executions. There's nothing like this experience in the United States, and this magnifies the harm done by each individual homicide."

Rodríguez said there have been many gory homicides in Juárez during the past year. These include decapitated bodies left in public places.

The percentage of those considered poor or moderately poor has shrunk in Juárez over the past five years, according to the city's development office. But social inequality, isolation, low wages, costly utilities, rising prices and lack of provision of basic services still afflict its 1.4 million residents, making them susceptible to violence.

López Obrador promised socioeconomic reforms as a way to bring peace to Juárez and other border cities like Tijuana, which also is experiencing increased violence. The president's plan, called the Free Zone of the Northern Border, addresses how border cities can benefit from being between developed and emerging economies.

"The conditions that exist in Ciudad Juárez don't exist anywhere else in the world," Mexico's Secretary of the Economy Graciela Márquez said in announcing the new government's border reforms. Márquez said she wants to take advantage of Mexican border cities' proximity to the U.S. economy because it is a "locomotive."

On Jan. 2, López Obrador's administration announced it would double the minimum wage in Mexico's six border states to just over $10 per day, reduce payroll and sales taxes, and ensure gasoline sells for the same price in Mexico as on the U.S. side of the border. Mexico's border states account for 7.5 percent of the country's gross domestic product.

"It's the first time in 40 years somebody is trying something a little bit different," Rodríguez said.

Soon after López Obrador's inauguration on Dec. 2, the military returned to patrolling Juárez's streets, backtracking on his campaign promise to withdraw soldiers from policing functions.

As recently as Thursday, organized criminal factions changed tactics by joining together to attack their common enemy: Juárez police officers, whom they allege have been killing street-level drug dealers. Armed men staged a coordinated series of five attacks on municipal police in public spaces, killing one officer, injuring eight others, torching a passenger bus and terrifying bystanders.

With 68 slayings in the first three weeks of this year, Ciudad Juárez's homicides have exceeded El Paso's annual rate threefold.

"It's too little and it's too late," Rodríguez said of the president's border economic reforms. "It's not going to do anything to lower the murder rate here."