TEHRAN, Jan 24 - Syria and China, among other countries, have condemned US interference in Venezuela, after Washington recognized opposition leader Juan Guaido, who declared himself president, as interim leader. 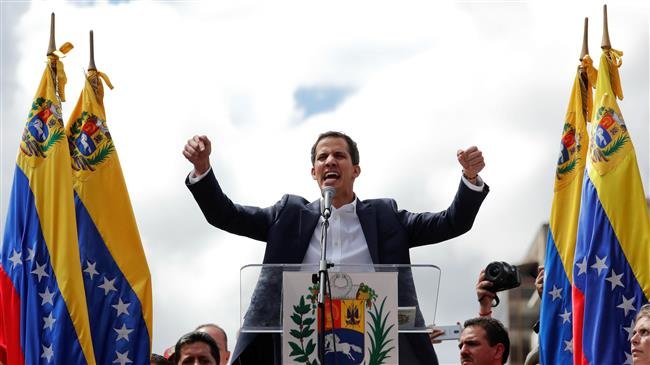 TEHRAN, Young Journalists Club (YJC) -Damascus has strongly censured US President Donald Trump’s administration for its “interference” in the South American country’s internal affairs after the White House recognized the self-proclamation of Guaido, the head of the opposition-controlled National Assembly, as the president of the country.

Syria “condemns in strongest terms going to extremes by the US and its blatant interference in the affairs of … Venezuela, which constitutes a flagrant violation of all international norms and laws and a brazen attack against the Venezuelan sovereignty,” Syria’s official news agency SANA quoted an unnamed official from the country’s Foreign and Expatriates Ministry as saying on Thursday.

The strongly-worded statement by the Syrian ministry came just one day after Juan Guaido, the 35-year-old leader of Venezuela’s opposition-controlled National Assembly, abruptly declared himself the “interim president,” of the country and quickly won the backing of the US and its Latin American allies.

Echoing Trump’s stance, US Secretary of State Mike Pompeo said Washington would “conduct diplomatic relations” through the “government” of Guaido and not that of Venezuela’s incumbent President Nicolas Maduro.

Guaido’s bizarre announcement followed two nights of violent anti-government protests in working-class neighborhoods of the country’s capital Caracas, which called on Maduro to step down.

The Syrian Foreign Ministry further said that Damascus categorically “rejects US blatant interference” in other countries in general and in Venezuela in particular, renewing Syria’s “full solidarity with the Venezuelan leadership and people” in preserving the sovereignty of the Latin American country and its tireless efforts to foil the “hostile schemes” of the US administration.

‘US officials; remarks, dangerous intervention in other countries’ affairs’

Reza Tabatabai Shafiei, Iran's ambassador to Venezuela’s neighboring Bolivia, says in an exclusive interview with Press TV that rapid recognition of claims made to presidency by Maduro’s opposition rival amounts to dangerous intervention in another country’s internal affairs.

China opposes outside interference in Venezuela

Meanwhile, at a regular briefing in the capital Beijing, China’s Foreign Ministry spokeswoman, Hua Chunying, said her respective country would “support” the Venezuelan government in its efforts to protect the Latin American state’s “independence and stability,” calling for all sides to calmly and reasonably find a peaceful solution.

“I want to emphasize that outside sanctions or interference usually make the situation more complicated and are not helpful to resolving the actual problems,” she further said, in an apparent reference to Washington’s move in recognizing Guaido’s self-proclaimed presidency.

Additionally on Thursday, the European Commission, the EU’s executive body, declined to recognize Guaido as the interim president of Venezuela, calling for a political process leading to new elections.

“We stand behind the democratic forces in the country," Reuters quoted an unnamed Commission spokeswoman as saying at a regular news briefing.

“Our aim is to focus on developments on the ground in Venezuela ... we are giving support to the National Assembly, we would like a political process that should lead to elections,” she added.

“The scenario has changed radically, there have been deaths. We have to prevent the situation from worsening. This undoubtedly demands a process of intervention to guarantee the only way out which is elections,” he said.

At least 13 people lost their lives in violent protests in the Latin American country this week.

When asked whether Madrid would endorse Guaido’s declaration, Borrell stressed that “what is important” is that Venezuela holds new elections.

In a related development on Thursday, UN Secretary General Antonio Guterres called for dialogue to stop Venezuela's political crisis from getting out of hand.

"What we hope is that dialogue can be possible, and that we avoid an escalation that would lead to the kind of conflict that would be a disaster for the people of Venezuela and for the region," Guterres said at the World Economic Forum in Davos.

The UN chief said, "Sovereign governments have the possibility to decide whatever they want,” adding, "What we are worried (about) with the situation in Venezuela is the suffering of the people of Venezuela."

Earlier in the day, Iran, Turkey and Russia expressed their strong support for Maduro’s “legitimate” government, warning Washington against interfering in the domestic affairs of Venezuela.

Oil-rich Venezuela is mired in economic turmoil, with hyperinflation, power cuts and shortages of basic items. It is also one of the world’s highest-crime countries.

Maduro was sworn in for a second term, after a vote marred by an opposition boycott and claims of vote-rigging.