TEHRAN, Feb 17 -The poisoning case of former Russian double agent Sergei Skripal in Britain has come to an interesting point as unknown people fly a huge Russia flag in the city where the controversial attack took place last year. 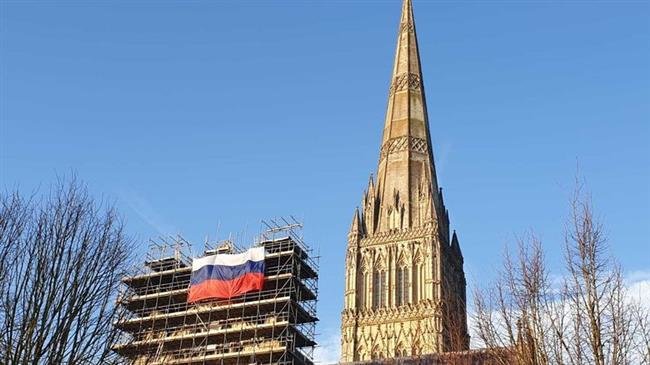 TEHRAN, Young Journalists Club (YJC) -British media said the giant tricolor had been draped from a monumental cathedral in Salisbury earlier on Sunday in an apparent show of support for Russia amid an ongoing diplomatic standoff with London over the poisoning attack in March last year on former Russian spy Sergei Skripal and his daughter.

Local officials said they had swiftly removed the flag which was hung high on scaffolding over the north front of the cathedral. Police said it was examining CCTV footage to obtain more information.

The apparent pro-Russia stunt came a day after reports suggested British investigators had identified a third Russian military intelligence officer who could have been involved in the attack on the Skripals.

Two Russians had earlier been named as main suspects in the attack which London believes was carried out using a deadly Soviet-era poison called Novichok and on the direct orders of the Russian government.

Moscow has consistently denied any role in the attack and some officials have claimed the case was a fabrication by the British intelligence agencies to negatively impact UK-Russia ties and to divert public attention from domestic problems at a time when the British government was under fire for its strategy to leave the European Union.

Russian embassy in London said Saturday that it would not comment on reports about the role of a third Russian agent in the case with a spokesman insisting they were a continuation of the “noise” that had surrounded the issue over the past year.

“We are confident that the closer it gets to the date of Britain’s exit from the EU, the number of such provocative publications loaded anti-Russian sentiment will only rise,” said the spokesman.