Tehran, YJC. “Disaster” is the name given by Larijani to the EUHR’s meeting with some human rights activists of Iran. 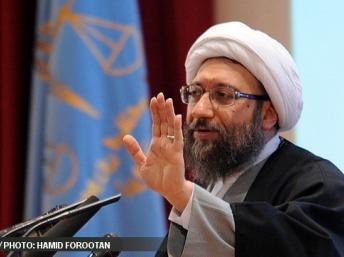 "The EUHR Catherine Ashton having contact with some seditionist in her recent visit to Iran and the statements that followed were a kind of disrespect for Iran,” exclaimed Sadeq Amoli Larijani, Head of Iran’s Judiciary Branch.

He stated "Of course we are not afraid of meetings and talks, but the recent actions were strange since some Foreign Ministry officials stated that they had not been aware of some of the meetings.”

Speaking to high-ranking judiciary officials Larijani said that reports go that Mrs. Ashton had placed as a prerequisite for her trip to Iran some visits based on human rights concerns.

He added "Agreeing to the trip with the conditions that some meetings are arranged outside diplomatic norms is disastrous. It is still more disastrous to be ignorant of such visits.”

"Where in the world do they let a foreigner in and let them go wherever they choose and see whoever they want? Has the country got no order?” he demanded.

He rejected meetings outside diplomatic regulations as unacceptable and stated "If such a trend is going to be continued and such actions be taken on such trips against the country’s security and interests, the Judiciary Branch is going to take action whose consequences will concern the Foreign Ministry.”