TEHRAN, May 03-Algerians have once again taken to the streets of the capital Algiers, demanding the removal of the leftovers of the old regime and an end to the military rule. 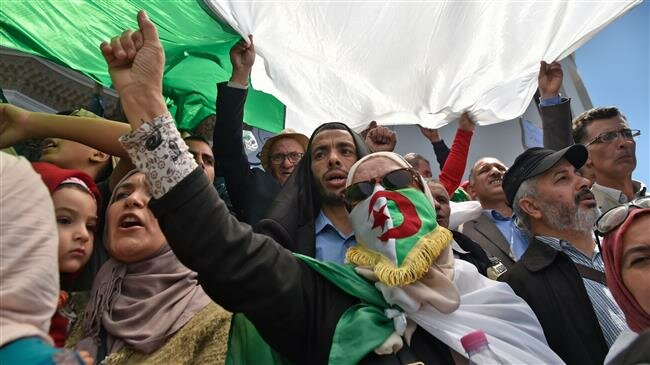 TEHRAN, Young Journalists Club (YJC) -"We will march until the entire group of Bouteflika's men leaves," Hamid Benmouhoub, one of the people who joined the Friday’s protest, said.

President Abdelaziz Bouteflika announced his resignation on April 2 after the army chief General Ahmed Gaid Salah withdrew his support for the ailing president following months of protests against his rule that erupted over his decision to seek a fifth term.

Despite his fall, the protests have continued as many demand the removal of all figures associated with Bouteflika’s regime, including interim leader Abdelkader Bensalah, the former upper house speaker, and Prime Minister Noureddine Bedoui, and the prosecution of those they see as corrupt and still in power.

Carrying placards that read "No to military rule”, the protesters also chanted for Salah, the key powerbroker now, to "resign" after he appeared to rebuff their demands.

Salah on Wednesday urged protesters to join dialogue with state institutions to find a solution to end the country’s political crisis, a day after he dismissed calls by demonstrators for the removal of Bensalah and Bedoui.

"We cannot hold a dialogue with the symbols of the old system," the TSA news site quoted Abdelouahab Fersaoui, president of the Rally for Youth Action civil society group, as saying.

"We can't start a dialogue with Bensalah or Bedoui or anyone else who is responsible for the current state of the country."

The crowd, estimated to be tens of thousands, chanted "We will not shut up!" on Friday and vowed to keep up their protests during Ramadan, the Islamic holy month of fasting, which is set to begin next week.

"We will continue to march during Ramadan to demand a transition period with clean people (in charge). We will not let up," the 56-year-old protester, Zakia Benabdrahmane, said.

The interim administration that has taken over has pledged to hold presidential elections on July 4, but Algerians say voting cannot be free and fair if it is organized within the same judicial framework and by the same institutions as those that operated under Bouteflika.