Iran to unveil countermeasures to US withdrawal from JCPOA

TEHRAN, May 06 -Iran is to unveil its countermeasures in response to a move made by the United States last year to withdraw from a landmark 2015 nuclear agreement signed between Tehran and six major world powers. 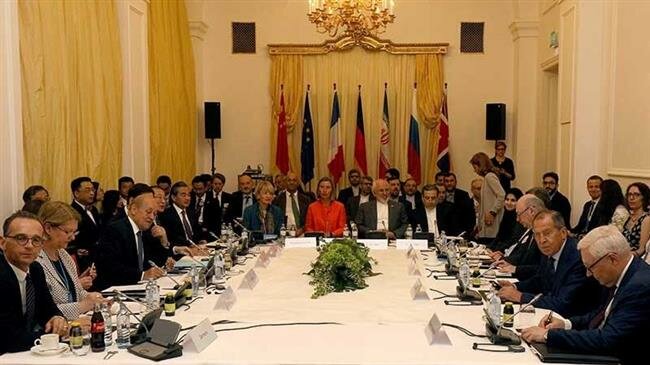 TEHRAN, Young Journalists Club (YJC) -The plans will be announced on Wednesday, which marks the first anniversary of the US withdrawal from the nuclear deal, officially known as the Joint Comprehensive Plan of Action (JCPOA), the Iranian Students News Agency (ISNA) reported on Monday.

US President Donald Trump withdrew Washington in May 2018 from the landmark Iran nuclear agreement, reached between Iran and the P5+1 group of countries -- the US, Britain, France, Russia and China plus Germany -- in July 2015. He also decided to re-impose unilateral sanctions against Tehran.

Under the JCPOA, Iran undertook to put limits on its nuclear program in exchange for the removal of nuclear-related sanctions.

Despite Washington's withdrawal, Iran has not left the deal yet, but stressed that the remaining signatories to the agreement have to work to offset the negative impacts of the US pullout for Iran if they wanted Tehran to remain in it. The other parties to the JCPOA have repeatedly announced that the deal is working and should stay in place.

According to ISNA, Iran's anticipated measures fall within the framework of articles 26 and 36 of the nuclear accord, though the Islamic Republic is not considering leaving the JCPOA as an option for now.

The report added that partial reduction or total abolition of some of Iran’s commitments in addition to the resumption of some nuclear activities, which had come to a halt under the JCPOA, constitute the Islamic Republic's first steps in response to the US withdrawal from the nuclear deal and European countries' failure to fully comply with their commitments.

According to the report, Iran is still keeping the door open to diplomacy in order to give the other parties to the JCPOA a second chance to return to diplomacy and quit the erroneous path of unilateralism by proving their full commitment to the nuclear deal with Iran one more time.

EU officials, who have undertook commitments, but failed to live up to them over the past year, have been unofficially informed of Iran's new plans, it added.

The US administration on Friday imposed sanctions on Iran's export of enriched uranium, but at the same time renewed three key waivers that will allow its European allies, Russia and China to cooperate with the Islamic Republic on civil nuclear program.

"Any involvement in transferring enriched uranium out of Iran in exchange for natural uranium will now be exposed to sanctions. The United States has been clear that Iran must stop all proliferation-sensitive activities, including uranium enrichment, and we will not accept actions that support the continuation of such enrichment," the State Department announced in a statement.

In reaction to the new US sanctions, Iranian Parliament Speaker Ali Larijani said on Saturday that the Islamic Republic will continue uranium enrichment in line with the multilateral nuclear deal.

"Under the JCPOA, Iran can produce heavy water… and based on the agreement, we have not carried out anything in violation of it," Larijani said, adding, "Therefore we will carry on with enrichment activity. You can either buy it or not."

The US administration also said in a statement on April 22 that, in a bid to reduce Iran's oil exports to zero, buyers of Iranian oil must stop purchases by May 1 or face sanctions. The move ended six months of waivers, which allowed Iran’s eight biggest buyers -- Turkey, China, Greece, India, Italy, Japan, South Korea and Taiwan -- to continue importing limited volumes.

“The United States, Saudi Arabia and the United Arab Emirates ... along with our friends and allies, are committed to ensuring that global oil markets remain adequately supplied,” the White House statement said, adding, “We have agreed to take timely action to assure that global demand is met as all Iranian oil is removed from the market.”

Last November, the US enforced sanctions targeting the Islamic Republic’s banking and energy sector. However, it granted waivers to the eight major importers of Iran’s oil, fearing market instability.