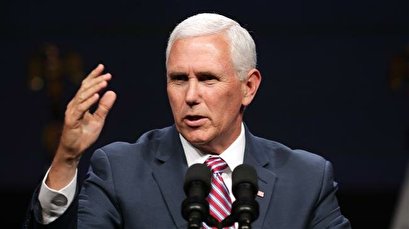 TEHRAN, Young Journalists Club (YJC) - In a speech to the Americas Society at the State Department scheduled on Tuesday, Pence will warn that the US will soon move to sanction 25 additional magistrates on Venezuela’s supreme court, a senior Trump administration official told Reuters.

Pence will offer new “carrots” to the Venezuelan military, as well as an economic aid package contingent on a political transition, according to the official, speaking on condition of anonymity.

Pence’s speech will be the first look at the Trump administration’s recalibrated strategy following street protests last week led by Juan Guaido, the opposition figure backed by the United States and most other Western countries.

Guaido had described the protests as the start of his “final phase” to oust Maduro, but mass military defections failed to come to fruition.

Early on Tuesday, a group of Venezuelan armed troops accompanying opposition leader Juan Guaido clashed with soldiers at an anti-government rally in the capital, Caracas. Gunfire was heard, and more than 100 people were reported wounded in what was later revealed to be a US-backed coup.

Maduro, who has called Guaido a puppet of Washington, announced in a televised speech that the group of military personnel supporting Guaido had been defeated.

A second day of confrontations came on Wednesday as opposition supporters and security forces clashed during May Day protests in Caracas.

Addressing his supporters, Maduro said the coup attempt was directed from the White House.

Trump has invested considerable political capital in the diplomatic and economic intervention in the Venezuela crisis.

The United States has imposed sweeping sanctions on Venezuela, including “secondary sanctions” on companies from other countries that do business with Venezuela, and additional shipping sanctions for oil.