TEHRAN, May 10 - US Secretary of State Mike Pompeo’s anti-Iran threats are nothing but “bombastic” comments stemming from the same war rhetoric already used by Washington against Libya, Syria and Iraq, which itself receives “war marching orders from Tel Aviv,” says an American political analyst. 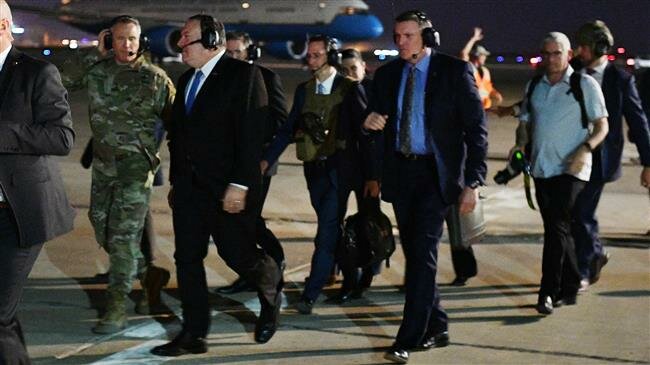 TEHRAN, Young Journalists Club (YJC) - Rodney Martin, a former congressional staffer based in Los Angeles, made the remarks in an interview with Press TV after Pompeo cancelled his scheduled meeting with German officials in Berlin to pay an unannounced visit to the Iraqi capital of Baghdad, where he continued attempts to sow discord between the two neighboring countries of Iran and Iraq.

“Secretary of State Mike Pompeo’s bombastic comments are nothing but ginning up war rhetoric. This is a neocon playbook to go around the globe in order to gin up a false narrative to attempt to stir up some hysteria and to gin up the neocon and Donald Trump’s base to push false narratives that Iran is endangering the Middle East oil supplies, that Iran is a rogue state, all of the buzz words that the United states has used when it has attempted to either militarily engage in aggression or as has been the case since the 1979 Islamic revolution engage in economic terrorism through sanctions, attempted economic isolation,” Martin said.

“We've seen the same playbook used against Libya, against Syria and has been used against Iran and was used in the run-up to the war against Iraq. So, this is more of the same, no doubt that the United States administration is getting that war marching orders from Tel Aviv. Tel Aviv uses the exact same rhetoric versus Iran,” he added.

The American political analyst also pointed out to rumors in Arab media that Pompeo had asked Iraq during his visit to be an “intermediary” between Washington and Tehran.

“If that is true, it would be interesting to see if that is one good faith effort to tone down the situation or if it’s in response to [Iranian] President [Hassan] Rouhani’s declaration that Iran would be withdrawing from portions of the Iran nuclear deal, not all,” Martin said.

Martin further said, “The US was engaging in an international game of geopolitical poker and Iran called the United States' bluff,” adding that, “the US is now looking for a backchannel secret way to try to save face because there is no desire in the US, no support in the US not even in Donald Trump’s political base to engage in a war for greater Israel against Iran.”

Trump on Thursday said he wants Iranians to call him, and said the United States and Iran could make a fair deal.

“What I would like to see with Iran, I’d like to see them call me,” Trump told pool reporters on the sidelines of an event in the White House. “What they should be doing is calling me up, sitting down, We can make a deal, a fair deal.”

Meanwhile, the American political analyst said the United States has a long history of violating international treaties and that “every nation” has agreed that Iran has maintained compliance with its nuclear deal – known as the Joint Comprehensive Plan of Action (JCPOA). He stressed that this time again it was the US that broke the treaty and left and now is accusing Iran of violations.

Iran’s President Hassan Rouhani announced on Wednesday a decision made by the Supreme National Security Council (SNSC) for the country to suspend the implementation of part of its commitments under the JCPOA.

According to the decision, Iran will stop selling its excess low-enriched uranium and heavy water as it was contractually obliged under the nuclear deal.

Rouhani said Iran would take further steps in 60 days if the other signatories to the landmark deal failed again to ensure that it still benefited from staying in the nuclear accord despite the US’s withdrawal.

The move came shortly after Washington also imposed new sanctions against Iran's enriched uranium exports and metal and mining sectors in the past week.