Over one million Palestinians in Gaza not having enough food by June: UNRWA

TEHRAN, May 13 - The United Nations Relief and Works Agency for Palestine Refugees in the Near East (UNRWA) has warned that it will not be able to provide food to more than one million Palestinian refugees in the besieged Gaza Strip if it cannot raise at least an additional $60 million by next month. 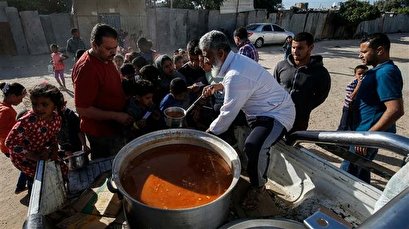 TEHRAN, Young Journalists Club (YJC) - “At a time when Muslims around the world are observing the holy month of Ramadan, often characterized by the festive nature of its Iftars, in Gaza, more than half the population depends on food aid from the international community,” UNRWA said in a statement released on Monday.

The statement added, “Unless UNRWA secures at least an additional US$60 million by June, our ability to continue providing food to more than one million Palestinian refugees in Gaza, including some 620,000 abject poor -- those who cannot cover their basic food needs and who have to survive on US$1.6 per day -- and nearly 390,000 absolute poor -- those who survive on about US$3.5 per day – will be severely challenged.”

Furthermore, Matthias Schmale, director of UNRWA Operations in Gaza, said, “This is a near ten-fold increase caused by the blockade that [led] to the closure of Gaza and its disastrous impact on the local economy, [and] the successive conflicts that razed entire neighborhoods and public infrastructure to the ground.”

Meanwhile, Palestinian Prime Minister Mohammad Shtayyeh has blamed the continued Israeli siege on the Gaza Strip for the deterioration of the situation in the coastal enclave.

“The world must not forget that the issue of the Palestinians is not only a humanitarian one, but also a political,” Shtayyeh said in Jerusalem al-Quds on Sunday.

The Gaza Strip, the senior Palestinian official noted, has been suffering from an Israeli siege for more than 12 years and this is aimed at serving a US plan to pass the so-called “deal of the century,” end any chance of a “two-state solution” and turn the Palestinian issue into just a humanitarian one.

Palestinians have held weekly rallies along the Gaza border to protest the siege on the enclave and demand the right for refugees to return to their homes they fled during the 1948 creation of Israel.

The Gaza clashes reached their peak on May 14, 2018, on the eve of the 70th anniversary of Nakba Day (Day of Catastrophe), which coincided with a US decision to relocate its embassy from Tel Aviv to occupied East Jerusalem al-Quds.

On June 13, 2018, the United Nations General Assembly adopted a resolution, sponsored by Turkey and Algeria, which condemned Israel for Palestinian civilian deaths in the Gaza Strip.

It called for “immediate steps towards ending the closure and the restrictions imposed by Israel on movement and access into and out of the Gaza Strip.”