TEHRAN, Nov 14_The President of Iran states “whenever there was an uprising against injustice or to gain independence, America has always been on the suppressive side.” 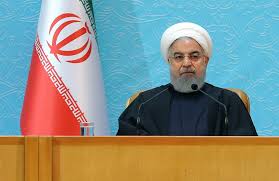 TEHRAN, Young Journalists Club(YJC)_Hassan Rouhani, President of Iran, at the 33rd International Islamic Unity Conference, stated, “Over the last 30 years the source of every war, killing and regional disputes have been America and the Zionist regime. The younger generation must realize that America is not a reliable ally for regional nations and that the problems must be solved by the people.”

“Their new plot is to make us forget that world powers today have had a very long history of Islamophobia,” he explained. “All their efforts have been to erase the long list of offenses western countries (at the top of them, America) have committed against Islam. In addition, they have tried to change the narrative of their occupation of Palestine and to overlook the millions killed and displaced.”

“They have attempted to make the Zionist regime seem like an ordinary country that has been accepted by Muslims and even Palestinians. Even the regime in power in America has tried to solve the Palestine- Zionist conflict with money; they called it ‘the deal of the century’ and strived to make Jerusalem the capital of the Zionist regime. They failed at their plan,” he added.

“They brought their heavily armed cavalry into the region with the excuse of fighting terrorism and but we have always known it was for the oil fields in Syria. When they initiated a war in the Middle East and began selling weapons of mass destruction, it quickly became clear that their objective is to get their hands on oil money,” he said.

“The killing of innocent people from Afghanistan to Iraq to Yemen and creating discord between Islamic countries are all part of America’s scheme to destabilize the Middle East,” he continued. “To those saying America can help the region, I say show me an example of when they have. In all these years, when has America and the Zionist regime not been responsible for coups, wars and disagreements? Whenever there was an uprising against injustice or to gain independence, America has always been on the suppressive side.”

“There is no exaggeration when I say Iran has been on the frontline of the resistance for 40 years. We must not forget the leader of the Islamic resistance, the late Imam Khomeini (PBUH), initiated the opposition against Zionism and American antagonism. Iran is the only Islamic country that turned the Zionist’s headquarters into the Palestinian embassy and has since the revolution supported all resistance movements all over the world,” he stated.

In addition, the President pointed out the harshest sanctions in history have been put against the Iranian people. “When we look at the statistics we see that from last November till now, Iran has had an economic growth that was highly unanticipated and that every month has a higher growth than the month before,” he further explained. “Our international trade has grown from 6.6 billion dollars to 7.4 million dollars,"

Hassan Rouhani emphasized the significance of unity in the Islamic countries for solving disputes in the gulf region. “With knowledge we can create power and with unity we can constitute dignity.”

Share to
Related News
IRGC Slammed the French president's remarks in support of insulting the Prophet of Islam
New US Sanctions on Iran out of Weakness, Desperation: General Staff
Tags
palestine ، resistance ، zionist regime
Your Comment