Ukraine's new Western-backed president on Friday declared a week-long unilateral ceasefire and unveiled a sweeping plan for curbing a pro-Russian insurgency that killed 13 more soldiers in fierce clashes in the eastern rustbelt. 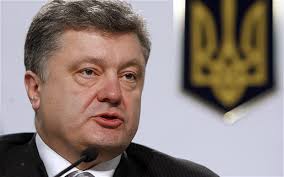 Ukraine's new Western-backed president on Friday declared a week-long unilateral ceasefire and unveiled a sweeping plan for curbing a pro-Russian insurgency that killed 13 more soldiers in fierce clashes in the eastern rustbelt.
But both the Kremlin and a senior rebel commander immediately rejected Petro Poroshenko's proposals for ending the battles that have claimed the lives of more than 375 people and left the ex-Soviet country on the verge of splitting in two.
US President Barack Obama, French counterpart Francois Hollande and German Chancellor Angela Merkel welcomed the unilateral ceasefire announcement while warning of further possible steps to "impose costs on Russia" if Moscow  fails to de-escalate the situation, the White House said.
Obama spoke separately with Merkel and Hollande on Friday and the three leaders stressed the need for Russia to pull back its "destabilising presence" from the border, a White House official added.
The Kremlin swiftly dismissed the ceasefire as "not an invitation to peace and negotiations but an ultimatum for the militias in the southeast of Ukraine to give up their weapons".
Valeriy Bolotov of the self-proclaimed Lugansk People's Republic warned that "no one will lay down their arms until there is a full troop withdrawal from our land".
And Poroshenko himself stressed on his first visit to the restive Russian-border region since assuming office on June 7 that the order for Ukrainian soldiers to halt fire "does not mean that we will not fight back against aggression toward our troops."
A Ukranian security spokesman reported that the latest battles had claimed the lives of 13 soldiers -- a toll underscoring the uptick in violence witnessed in the past week.
Kiev was also forced to fend off Moscow's charges that Ukrainian forces had wounded a Russian border official when a shell crossed the border during a recent clash.
The Kremlin demanded "an explanation and an apology". Ukraine's defence ministry said the rocket grenade had been fired by pro-Russian "bandits" and denied its soldiers' involvement.
The sense that tensions on the ground were rising was further reinforced when Washington followed up similar charges from NATO by accusing the Kremlin of stirring up new trouble along its western neighbour's frontier.
A senior US administration official said Russia had deployed "significant" military forces near Ukraine "to provide active support for separatist fighters".
The Kremlin had earlier confirmed deploying some units to "reinforce the protection of the Russian border".
However it further rejected charges of rocket launchers and even tanks being sent across the Russian border to help the insurgents destabilise the country and weaken the new leaders as punishment for their decision to leave Russia's orbit and establish a permanent alliance with the West.
- 15-point peace plan -
=======================
Poroshenko's ambitious push for peace followed two calls he had placed to Russian President Vladimir Putin within 72 hours in the belief that no truce would work without the Kremlin strongman's support.
The 48-year-old chocolate baron said that seven days provided the rebels "more than enough time" to show they were willing to engage in direct talks.
Poroshenko's announcement automatically enacted a 15-point plan that demands that the militias disarm and promises to decentralise power through constitutional reform.
The initiative drops criminal charges against fighters who committed no "serious crimes" and provides "a guaranteed corridor for Russian and Ukrainian mercenaries to leave" the conflict zone.
And it establishes a 10-kilometre (six-mile) buffer zone along the border whose details remain unclear and that Moscow had previously said would break international law.
Poroshenko's initiative also calls on "local government bodies to resume their operations" -- a demand rejected by separatists who have proclaimed their independence from Kiev and occupied administration buildings in about a dozen cities and towns.
"We cannot talk about a ceasefire because the Ukrainians are firing on civilians using aviation and artillery," a separatist fighter who identified himself only as Oleg for security reasons told AFP in the eastern hub of Donetsk.
"We cannot trust Poroshenko," the 45-year-old said.
- Decentralisation of power -
=============================
Putin had earlier bowed to Western pressure and refused to recognise the independence proclaimed by the Russian-border regions of Donetsk and Lugansk in the wake of disputed May 11 sovereignty referendums.
But he has lobbied for Kiev to turn Ukraine into a federation that provides regional leaders with the right to draft laws and establish independent trade relations with nations such as Russia.
The new pro-EU leaders who rose to power after months of deadly protests toppled Russian-backed president Viktor Yanukovych in February have faced similar pressure from the West.
But Washington and the European Union have stopped short of supporting the "federalisation" idea promoted by Putin and the regional rights outlined in Poroshenko's proposal were limited.
It guarantees the "protection of the Russian language" and obliges the president to consult local leaders about whom he should appoint as governor.
But it does not give regions the right to elect their own heads of administration -- another key Russian demand.
AFP
Share to
Tags
Ukraine ، Poroshenko ، ceasefire ، east
Your Comment