Saturday, 14 November 2020_Far-right groups and other supporters of US President Donald Trump plan to descend on Washington on Saturday amid heightened tensions over the result of the disputed November 3 election. 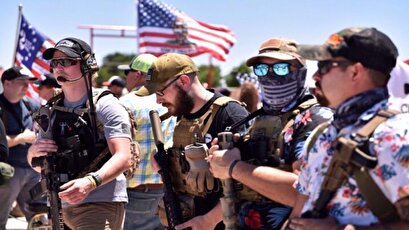 Republican Trump has refused to concede the election to Democrat Joe Biden, the projected winner of the race, claiming that widespread voter fraud has taken place.

While some irregularities have been reported in key battleground states, election officials have said they are not serious enough to affect the outcome of the vote.

Trump’s backers, including his Republican allies in Congress, have amplified his claims that the election was stolen from him.

Far-right groups have been promoting an event online in an effort to further the president's claims of election fraud.

The protests in the nation’s capital will bring together a wide array of such groups, including Oath Keepers militia and the Proud Boys. Some left-wing groups are planning to stage counterdemonstrations.

The Trump supporters, who plan to rally near Freedom Plaza, just east of the White House, have given their rallies different names, including the Million MAGA March, the March for Trump and Stop the Steal DC. MAGA is an acronym for Trump’s campaign slogan “Make America Great Again.”