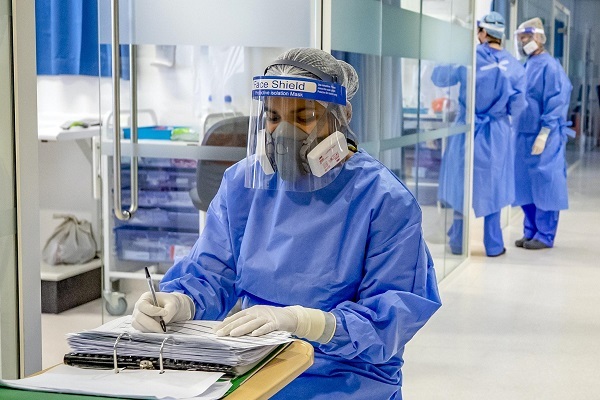 The government spent £10bn more buying personal protective equipment in “chaotic” and inflated market conditions during the pandemic than it would have paid for the same products last year, according to a report by the parliamentary spending watchdog.

But less than 10% of the gloves, gowns, face masks and other products – ordered for a total £12.5bn – had been delivered to NHS trusts and other frontline organisations by the end of July, the National Audit Office (NAO) report found.

Of 32bn data-x-items ordered at exponentially rising prices, 2.6bn had been distributed by July. The controversial “parallel supply chain”, rapidly set up by the Department of Health and Social Care (DHSC) in March, has still not received much of the PPE it ordered, the report said, “with some of it not yet manufactured”.

According to the NAO, the stockpile was “inadequate” before the pandemic, containing only two weeks’ worth of PPE but the health department then dramatically over-ordered, it was suggested, with the 32bn data-x-items amounting to five years’ worth of supply.

Setting out comparative costs for the equipment, the NAO said 760m gowns and coveralls, which would have cost 33p each last year, were bought for £4.50 each, an increase of 1,277%. One million body bags that would have cost £1 each last year were bought for £14.10, with millions of gloves, face masks, goggles and sanitiser also bought at inflated costs.

“The department had to pay such high prices because it was in the position of needing to buy huge volumes of PPE very quickly,” the report said. The total cost of all 32bn data-x-items at 2019 prices would have been £2.5bn, £10bn less than the government paid.

The report follows NAO revelations that the DHSC operated a “high priority” route for PPE suppliers with political connections, where bids for multimillion-pound contracts were 10 times more likely to be successful. Competitive tenders were suspended in the emergency.

NHS organisations told the watchdog that they had been able to get the PPE they needed in time, but the report contrasts that assurance with health and social care workers who told their professional bodies and unions that they suffered shortages of vital PPE.